Queenstown is preparing for a display of pride in a pandemic. 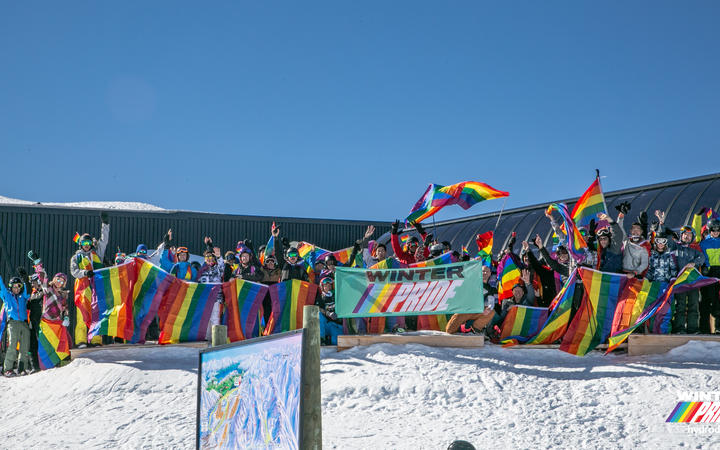 Winter Pride is a 10-day festival, which begins next Friday, 28 August. Photo: Supplied

Queenstown's Winter Pride Festival will go ahead unless the tourist town moves up from level 2 before Friday.

The festival runs from 28 August until 6 September.

The festival was initially canned when the country moved into level 4 lockdown, but since restrictions eased organisers have been preparing to hold the festival in a vastly different environment to what they are used to.

Festival director Martin King said there was plenty planned regardless of whether the Queenstown was at alert level 1 or 2 come Friday.

"As soon as we could see the light at the end of the tunnel we made the decision to relaunch the festival and rebuild it on the basis that we might have been at alert level 2 at that point, because we didn't know how long alert level 2 was going to continue on for," he said.

"So to that end we built a whole lot of events that were alert level 2 compliant, which were all seated and could all have capacities around 100.

"As soon as we saw we were going to level 1 we then started building other events we could add on as level 1 events that could be bigger, involve dancing."

He said those bigger events would be scaled down and spread across several events with a maximum of 100 people if Queenstown remains at alert level 2.

The government is expected to make a call on Monday about whether current restrictions will be extended or relaxed.

Martin King, who is based in Auckland, said he is awaiting the government's call to see if he can attend.

He is aware there would be some concern among the public about Aucklanders flying into Queenstown if their alert level was relaxed, but he emphasised all reasonable protective measures would be taken and the message of "if you're sick, stay home" was being pushed hard.

"People feeling safe is as critical as them being safe," he said.

"So showing them we care as event organisers, that we take this really seriously, is going to be vital."

About a third of ticket holders were based in Auckland.

"Normally 45 to 50 percent of our guests are Australians, so the festival is naturally smaller as a domestic only festival. But we know at the moment we have about 700 to 800 people who have bought tickets or passes.

"There should be a good 1000 people coming from around New Zealand at some point during the week to attend one, two or more events."

He was pleased with buy-in from the public with some events selling out over a month ago.

"It's great that we are alive, we're well, we're happening."