A man who rammed a police car and wiped saliva on officers, while claiming to have Covid-19, has been jailed for a year. 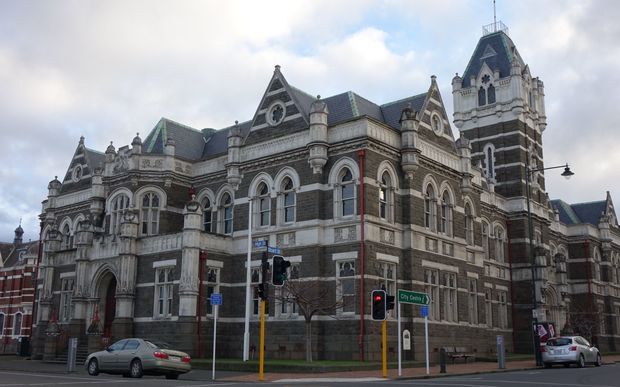 The Dunedin District Court was told the defendant tried to drive more than 500km during a time when all non-essential travel was banned. Photo: RNZ / Ian Telfer

On 7 May - while the country was at level 3 - William Frank Meredith, 45, decided to make a journey of more than 550km from Christchurch to Invercargill.

All non-essential travel at the time was banned, the Dunedin District Court heard yesterday.

Meredith only made it as far as Milburn, about 50km south of Dunedin.

Police had earlier been called about the unsafe manner of the defendant's driving and they found his stationary Subaru parked beside State Highway 1.

When a constable spoke to Meredith he appeared "clearly" affected by alcohol, court documents said.

With an impending trip to the police station, the defendant took off, pursued by the officer.

The chase was abandoned at Milton due to the erratic nature of Meredith's driving but Balclutha staff were informed he was heading their way.

Another patrol unit spotted the vehicle and followed at a distance.

When Meredith took another pit stop, police again approached on foot - with the same result.

The defendant sped away, until officers successfully deployed road spikes.

It did not stop the wild driver, but it slowed him down. Meredith lurched the next 6km at 30kmh, the court heard.

As police positioned themselves to end the 27km chase, the defendant rammed one of the cars, rendering it inoperable.

Eventually, Meredith stopped but it was not an indication of compliance. He refused to exit his car and struggled with officers as they handcuffed him.

There was no let-up in his belligerence at the Balclutha police station.

Meredith failed a breath screening test but refused to provide an evidential sample of either breath or blood.

Remaining unco-operative, the man wiped his saliva on custody officers.

In the cells, he claimed he was infected with Covid-19 and spat repeatedly, the court heard.

As a result, four police officers had to be tested and were required to self-isolate for three days, which meant Dunedin staff had to be temporarily transferred to cover their absence.

Counsel John Westgate yesterday passed on his client's apologies to those officers involved.

Meredith told Probation he had been in Christchurch with his ailing mother and was awaiting social housing to be arranged in Invercargill.

He accepted it was a "bad decision" to attempt the seven-hour drive in the circumstances.

Police sought more than $4000 for the damage Meredith caused to the patrol car but Judge Kevin Phillips said there was no prospect of the bill being paid, particularly given the defendant had an outstanding bill of nearly $12,000 from previous offending.

Meredith was convicted on seven charges and was banned from driving for 25 months.