The Canterbury medical community's frustration with its health chiefs reached a boiling point today, with a protest, an open letter and two more resignations on the Canterbury District Health Board's executive team. 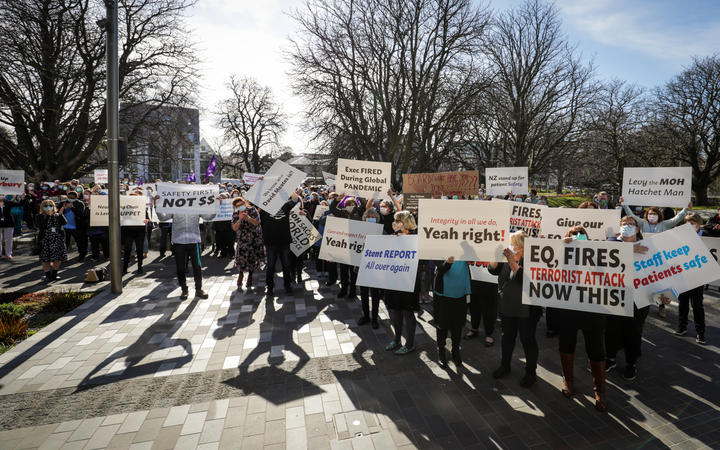 It happened as the board met to discuss how to reduce its $180 million deficit, with doctors and nurses fearing patient care wouldn't be the priority.

At the protest outside the health board's corporate office this morning, more than 100 masked doctors and nurses repeatedly hurled the question "what's going on?"

One protester, Nurse Educator Neil Hellewell, worried the board would have to "claw back" its money somehow, but wasn't being transparent about it.

Chief of Medicine at Christchurch Hospital, David Smyth, said the timing for any cuts couldn't be worse.

"We can't cope with a major cut in services. We've got Covid on the doorstep. We've got appalling facilities to look after Covid patients. We've lost our executive management team who were responsible for our response to the earthquake, our response to the mosque attacks. We are seriously worried and so should the people of Canterbury." 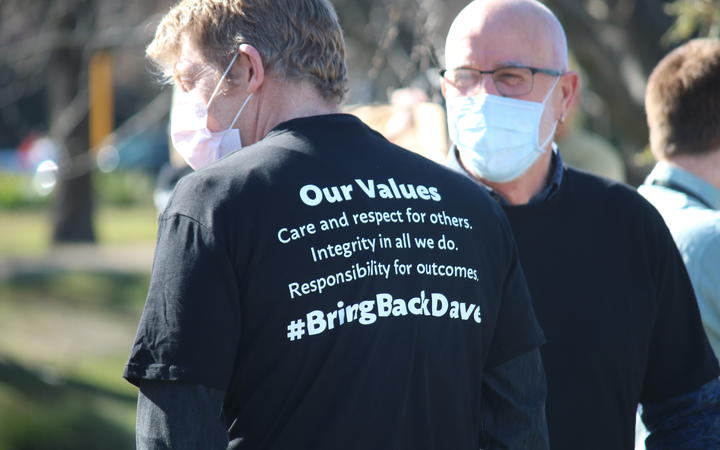 That executive leadership team has disintegrated in a matter of weeks, with the sixth and seventh resignations announced this morning.

Chief executive David Meates is also on the way out.

"This executive management team have brought the people of Canterbury through some very, very significant times and you can see that from the depth of feeling and the number of people here today, that they're well supported by the people who work for them and with them," she said. 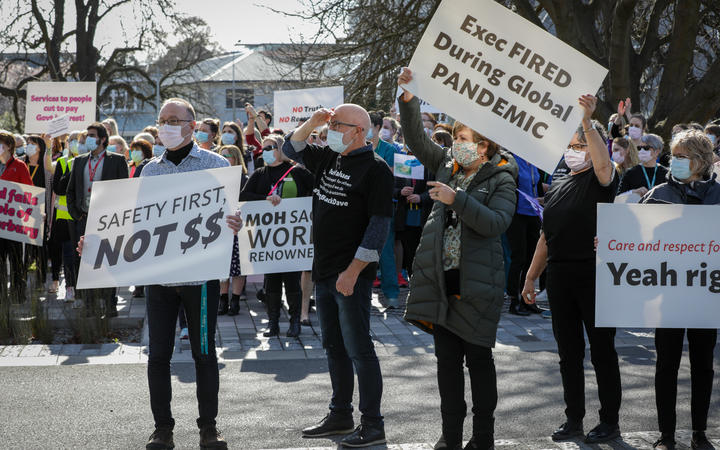 Although the resigning members hadn't explicitly stated a reason for leaving, Nurse John Hewitt thought they were no longer willing to put up with the actions of the board, or be complicit as it made decisions without taking their advice.

That includes the decision to accept a 'reduced cost' ward block in a future extension of the hospital against the advice of clinicians and staff.

"She has been the rock of the CDHB for many years as I've been here. That's why we're here today. It's the final straw," he said.

In an open letter published in The Press newspaper today, senior doctors detailed their demands for the board to act as advocates for the people of Canterbury, not the Minister of Health, with full transparency and better communication.

They want a review of the funding for Christchurch Hospital's rebuild and the board to seek feedback before appointing new staff.

Protesters gather outside of the Canterbury Health Board corporate office on 20 August. Photo: RNZ / Nate McKinnon

Hellewell also wanted the government to take leadership on its problems.

He said a letter senior doctors wrote to Prime Minister Jacinda Ardern, asking her to intervene, had already gone unanswered.

"There seems to be this vacuum of response coming from, unfortunately, the Prime Minister's office, the Ministry of Health. Absolutely nothing," he said.

There were no promises from Minister of Health Chris Hipkins at today's 1pm Covid-19 briefing, as he reinstated his confidence in the board.

He pledged to have a conversation with the board chair later today.