A woman tested at an Auckland pop-up clinic had to queue in a tent with other symptomatic people - with little social distancing and hardly anyone wearing a mask. 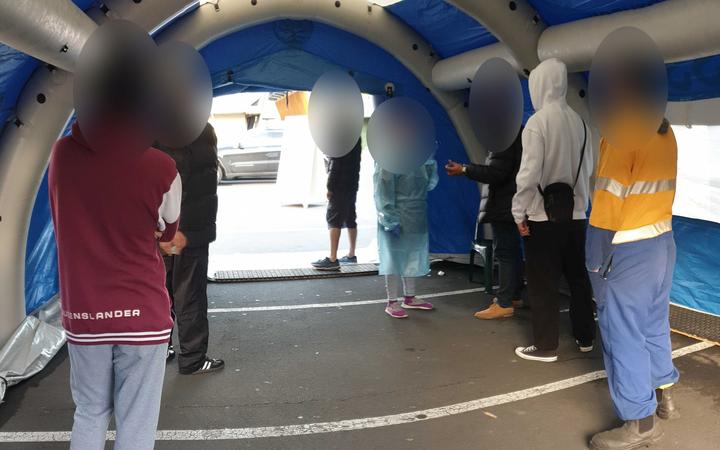 Inside the tent where symptomatic people were waiting for a Covid-19 test. Photo: RNZ

Auckland hit a record number of tests on Wednesday - 7800, with people queuing for hours. Yesterday was also set to be big once numbers were tallied.

The woman, who is an RNZ employee, had her test at the Otara Pop-up clinic.

After waiting in her car for three hours, she was surprised to be ushered into an open-ended tent.

At one stage there were 12 other people in it. She heard all of them describe their symptoms to the nurse.

"Like coughs, runny noses, headaches, fevers - a couple of people had been to Rotorua at the weekend," she said.

"So as the nurse was working through the people, I was getting more and more concerned that I was in this tent."

The woman was also conscious that she had symptoms too.

It was not possible to stay two metres from the person in front or behind her - but everyone was doing their best to try, she said.

The woman was wearing her own mask as was one other man, and staff offered one woman a mask but no one else was.

She was surprised because of the change in policy to tell Aucklanders they should wear masks.

A spokesperson for the Waitematā, Auckland, and Counties Manukau DHBs said in a statement there had been no significant safety issues at our CTCs.

"However our Otara CTC has had issues with people not maintaining physical distancing despite multiple requests from staff.

"Everyone accessing testing at the Otara CTC is offered a mask and asked to wear it, but not all do.

"We understand this is an anxious time for people in our communities and our CTCs are seeing high demand.

"We have infection prevention and control expert support on site at every CTC but we need the public's help - please do your part to keep everyone safe by following the instructions of our expert staff."