There is one new case of Covid-19 in managed isolation in New Zealand today, the Ministry of Health has confirmed.

He says the new case is a man in his 20s who arrived from Melbourne on 30 July. He was in isolation at the Grand Millennium hotel and had initially tested negative on day three, but then tested positive on day 12.

The total number of confirmed cases is 1220, with 22 active cases all in managed isolation and quarantine facilities. None require hospital-level care.

Dr Bloomfield has been recommended to take a Covid-19 test swab by Ora Toa clinical director Sean Hanna, and says he will take one today.

He says he's not getting a test because he had any symptoms but simply because it was recommended to him.

"It's partly to show people what's involved and some people do find it unpleasant... I'm not expecting people to do something I wouldn't do myself."

He says testing is an important part of the elimination strategy and urged people with symptoms to get tested.

It is pleasing to see that people are responding to the messages to get tested, but some days it was still below the 4000 target figure, he says.

He says they are also planning a Covid immunisation programme on how to deliver a vaccine to the population should one become approved and available. 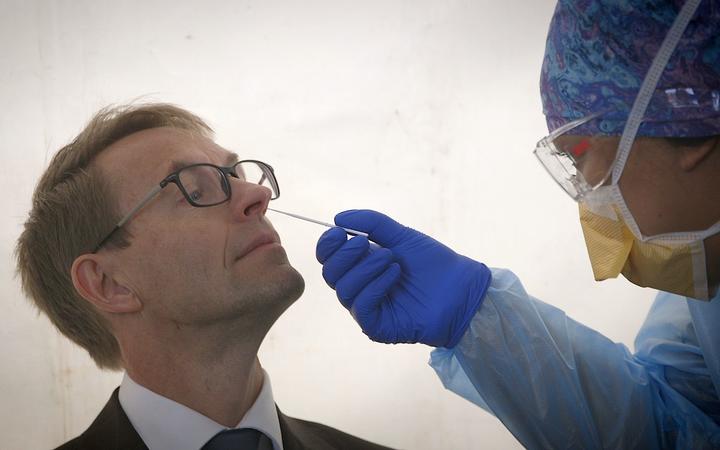 "Even though there's no vaccine yet been tested and confirmed or in manufacture, we are starting planning already on how to immunise the population and about which groups we would do first to get the most benefit for New Zealand."

Bloomfield says it's nice to have hit the 100-day milestone with no community transmission, but there was no place to be complacent.

Capital and Coast DHB director of strategy innovation and performance Rachel Haggerty said in the region there were 11 testing stations plus all of the primary care and four mobile teams at the height of the pandemic.

She urged people to continue to check their symptoms with healthline or their GPs.

Hanna said the cohesiveness of the community became more prevalent during the lockdown.

"We were able to deal with kids' skin infections and flu vaccines and Covid swabbing [in the clinic]. In the process we were keeping people with respiratory symptoms and viruses away from our medical centre, where people without infectious diseases were able to access healthcare."

Dr Bloomfield provided an update on the flu vaccination campaign, saying 1.77 million doses have been distributed to date. He says this was good considering the increased demand and global supply disruptions.

"So saying, it's very satisfying that more people have been vaccinated than ever."

"There were some temporary supply disruptions at the peak of vaccination season and that created some challenges and angst for practices around the country. We worked closely with DHBs and others to redistribute vaccines where we could."

He says there are still vaccines available and warned there could still be a late peak in the flu season.

Yesterday was the fifth day in a row with no new reported cases of Covid-19.