A fire that broke out overnight in the roof of St Paul's Cathedral in Dunedin has been brought under control but crews are working to ensure it is extinguished. 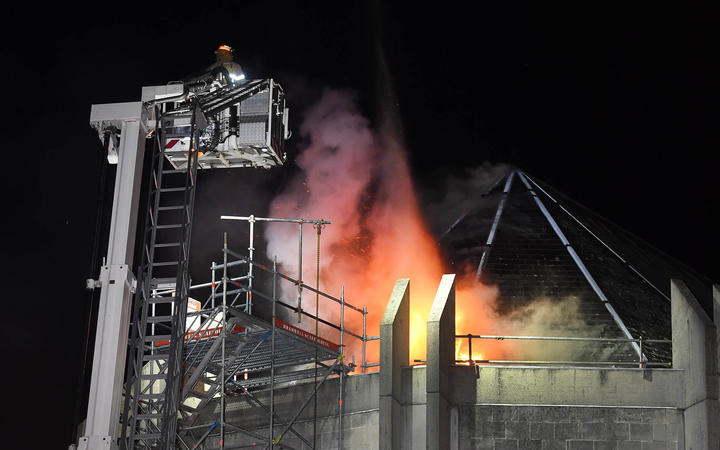 Flames emerge from the roof of the cathedral in the early hours of Tuesday morning. Photo: Otago Daily Times / Stephen Jaquiery

Firefighters were called to the Anglican cathedral at the corner of Moray Place and Stuart Street about 3.30am.

Seven fire trucks and a command unit were called to the central Dunedin church.

Crews using a large crane fought the flames from above. 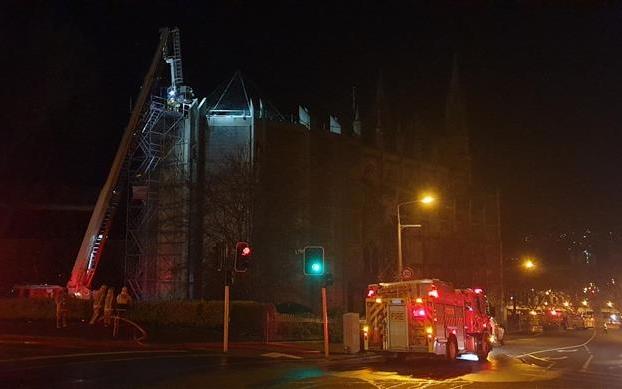 A crane at St Paul's Cathedral in Dunedin where the fire broke out in the roof overnight. Photo: RNZ / Tess Brunton

Police were also at the scene.

"They've been working with the turntable ladder to access and extinguish the fire, supported by crews within the building," Norris said early this morning. There were no injuries.

Smoke and flames had died down before dawn, and several firefighters were on the roof removing some roofing material.

"We've used multiple firefighting hoses and an aerial appliance to extinguish the fire, and now we're just going through salvage to protect what's in the church and make sure the fire's out."

Though the fire "wasn't massive" the height of the cathedral roof, and its older construction materials of wood and slate, made the job challenging.

Bishop of Dunedin Steven Benford had been inside the cathedral and said there was water damage and smell of smoke.

However he was optimistic over the structure of the building and that the church may be able to hold services there again "fairly soon".

He was thankful to the fire crews for their impressive efforts.

The scene of the fire. Photo: RNZ / Tess Brunton

There are some road closures and traffic diversions around the site.

Dunedin mayor Aaron Hawking said the fire would be tough on the Bishop and the faith community who had had a tough year already, having been unable to gather due to lockdown restrictions.

He said the council was open to discussing how it could help cover the costs of repairs to the damaged roof.

The interior of the cathedral showing damage to part of the roof. Photo: RNZ / Tess Brunton

Skylights in the roof of the cathedral's apse have been replaced over the past month, the Otago Daily Times reports

Work started on the Oamaru stone-walled cathedral in 1915 after the diocese spent 10 years fundraising the £20,000 needed for construction to start.

In 1971, a modern chancel designed by Ted McCoy was added, built of concrete and sheathed inside and out with Oamaru stone to match the rest of the building.

Last year a celebration service was held at St Paul's marking 100 years since it was consecrated on 12 February, 1919.