Auckland Airport has announced its international terminal will be separated into two zones in anticipation of a travel bubble.

In a release, the airport revealed it was preparing to separate different categories of travellers as they pass through the international terminal, in anticipation of a safe air corridor being formed between New Zealand and the Cook Islands.

It said that with planning in the final stages, the two self-contained areas would be ready to become operational shortly after any announcement of a travel bubble.

Zone A would be a "safe travel" area to be used by people travelling between countries with which New Zealand has a safe travel arrangement, and for people who had been in New Zealand for more than 14 days. It would include gates 1 to 10.

Zone B, including gates 15-18, would be a "health management area" for travellers arriving from countries with no bubble arrangement, and who would be required to enter managed isolation or quarantine, and for people transiting through the airport for other destinations.

This second zone was in a part of the airport which operates on independent utilities like heating, ventilation and air conditioning, and had a UV filtration system to further treat and clean the air, the statement said, and the zone would include a separate border processing facility. 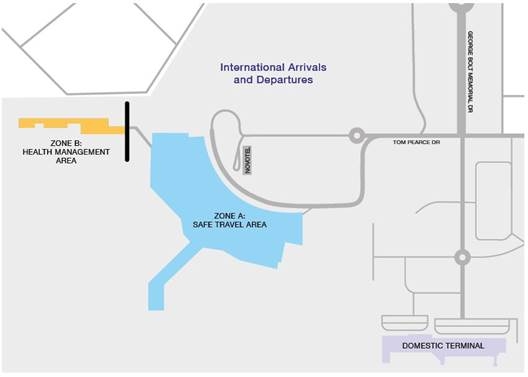 Auckland Airport announces its plans for two separate zones at its international terminal, allowing for travel to countries which New Zealand has a safe travel bubble arrangement, as soon as one is announced. Photo: Auckland Airport / Supplied

"Auckland Airport is a complex eco-system of organisations and we are working closely together to enable the safe and secure movement of travellers," Auckland Airport chief executive Adrian Littlewood said.

"Auckland Airport is building the new internal walls to allow for the terminal to be separated, and we are working through the final stages of planning with border agencies and airlines to enable the physical and operational separation."

The airport said Zone A would be a similar experience to travel before Covid-19, with the usual security and access to food and drink.

Access to those areas from Zone B would be "completely closed off", the airport said.

Speaking this afternoon after the final Cabinet meeting before campaigning for the 2020 general election begins in earnest, Prime Minister Jacinda Ardern said there needed to be a legal arrangement with protocols for prechecks for arrivals and departures, with health declarations.

Similar work under way for other airports

The Aviation Council, which represents large airports and airlines, said plans were under way for doing the same at the airports in Wellington, Christchurch and Queenstown.

Council co-chair Justin Tighe-Umbers said it was not necessarily foreshadowing any government announcement.

"This is an important part of setting up New Zealand's aviation system to be ready for any safe travel zones that do get announced by government. So this is about the sector doing the groundwork, getting things in place"

Tighe-Umbers said the airports hoped to have the zones ready for operation this month.