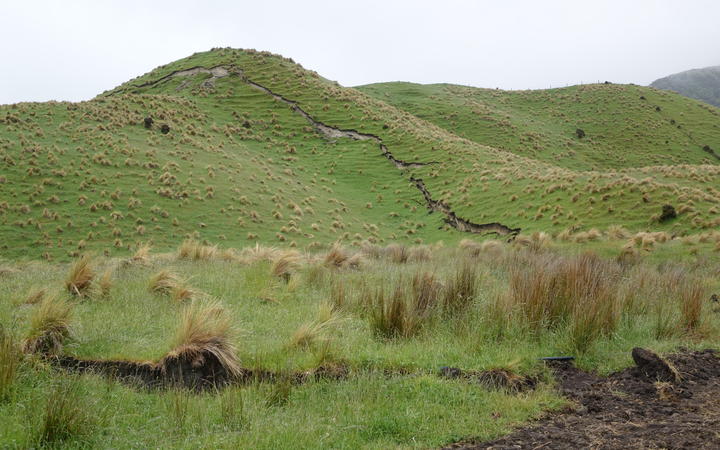 Effects of the Kaikōura quake on the landscape. Photo: RNZ / Tracy Neal

Kaikōura and Tararua district councils have yet to comply with the deadline of 1 January this year to identify weak buildings along priority roads.

Both councils say they've been under big pressure compounded by the pandemic.

Kaikōura district council said it's about to send out notices to 24 owners of West End buildings to get them seismically assessed.

"We're actually concerned that we have to actually even notify them that their building may be considered earthquake-prone," said senior manager of operations Dave Clibberly.

"That's just going to put another pressure on those business owners in what's already a difficult time."

Owners then get seven-and-a-half years to strengthen or demolish a building.

"Thankfully it's some years out," Clibberly said.

"If they had to take immediate action that would almost certainly pose unbearable burdens on some."

Tararua District Council has not identified its buildings yet.

Like Kaikōura, which spoke of conflicting work pressures on a very small team, Tararua had faced big pressures, according to spokesperson Mark Maxwell.

"TDC was working on its Building Accreditation as a priority from November 2019, which is required to ensure we can issue building consents," he said.

"We then experienced a water crisis closely followed by a drought.

"While still dealing with the effects of the water crisis and drought, Covid-19 emerged and required significant council resources."

Both councils said there were no immediate quake risk concerns.

"There is no further public safety risk than there has been," Maxwell said.

"Should an issue arise about the safety of a specific property there are mechanisms in the Building Act to address these."

The Ministry of Business, Innovation and Employment said it was working with the councils to get them to comply.

Clibberly said the ministry had congratulated KDC on its other seismic-related work.

Of the 38 councils in high seismic-risk areas, the other 36 did meet the deadline.