Students at Māngere College have taken a jab in the arm for the team of five million - but this time its for the fight against measles. 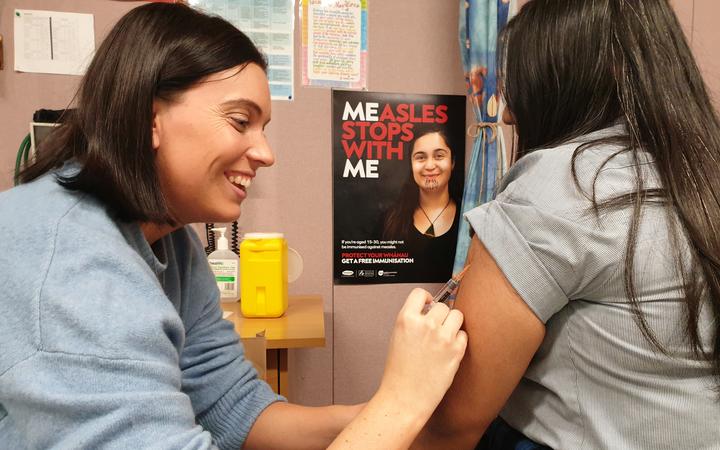 Associate Health Minister Julie Anne Genter announced a campaign this morning, to vaccinate an estimated 500,000 New Zealanders who may not be properly immunised, most of them aged between 15 and 30.

Doctors have for years called for the catch-up for those people, saying they must be urgently vaccinated to stop another outbreak like last year, where more than 2000 people caught the disease and nearly 800 were hospitalised.

Māngere College was one step ahead of the campaign, and had been catching up since the disease hit there last year.

Principal Tom Webb said they saw first hand the disruption measles could cause, even with just two positive cases at the school.

"We had to contact trace about 200 students all of who had to have some time of school, some of them up to ten days. That was while we were checking immunisation records - or getting them immunised - so they could come back to school," he said.

Year 10 student Vanessa Samaeli was of several at the pointy end of the fight today.

"The nurse just counted down from three ... It wasn't that sore, just a tiny pinch," she said.

She was happy to have the vaccination, saying it was important for the community as well.

Nurse Laura Williams regulary dished out jabs at the school and said she had not encountered any anti vaxxers, saying it was probably because of last year's brush with measles.

In New Zealand, 2194 people were infected in the latest outbreak, and its most likely the country exported the disease to Samoa where it became deadly.

Measles is so infectious, 95 percent of people need to be immune to protect populations from an outbreak.

It can be caught from a room where someone has sneezed or coughed even if they have already left.

Doctors welcomed today's campaign launch but said it should have happened years ago.

Many said South Auckland was particularly let down, with authorities seeming to let the disease run there.

The minister was light on details about how the catch-up would work, saying it would be up to district health boards to distribute the vaccination.

"It will be freely available in schools, in pharmacies for those over aged 16 and there will be vaccinations happening out in the community and at general practice," she said.

PJ Campbell, 17, said no one wanted measles, and no parent wanted their children to get it.

His jab was "not that bad."

"If you're offered the opportunity in school, or out in the community, and you don't think you've had it, get it," he said.