Distance learning has given parents the opportunity to weigh up the effectiveness of their children's maths homework during lockdown, a survey has found. 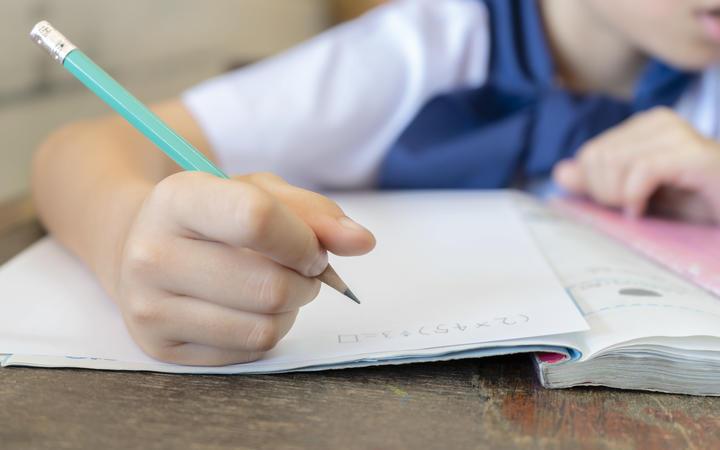 Some parents were pleased that their child's school was actively guiding maths learning during lockdown, while others did not feel the homework matched their child's level, according to a University of Auckland survey. Photo: 123RF

The University of Auckland survey asked more than 630 parents across the country about their experiences during those eight weeks.

It found that differences between the methods and practices of teachers and schools led some to question whether their children were getting the help they needed.

"There were a lot of parents who just praised the schools and teachers ... and they really appreciated the little instructional videos that were sent and the availability of these teachers via email and the positive communication," said math specialist Lisa Darragh, from the faculty of education and social work.

"On the other hand, there were parents that felt somewhat abandoned by their schools or spoke about the work being sent just seemed a bit inappropriate for their child."

Some parents reported spending up to four hours a day doing schoolwork with their children, which Dr Darragh said led some to the shock discovery their child did not how to tell time, or know times tables.

"Some parents really enjoyed the opportunity to actually sit down and do some maths and find out where their child was at. But this also led to them to being suddenly unhappy with the school and realising the child hadn't been catered for."

In these cases, parents who had 'chosen' a particular school for their children said they were not impressed with that school's management of distance learning - nor with its maths teaching in general.

"Parents may have felt they'd 'invested' in the wrong school and made the wrong choice," Dr Darragh said.

She told Morning Report that only one respondent out of the hundreds had conveyed they were seriously thinking about changing schools.

"I wouldn't say that would be the general message that parents got, I think it's certainly enough for schools to want to think 'hey should we touch base with our parent community, ask them a little bit about how they found their child's learning, did they discover anything'. It certainly would be worth a conversation."

Changes in maths learning over the decades and a general dislike for the subject may have been contributing factors to those responses, Dr Darragh said.

"But then we also had quite a few maths teachers or ex-maths teachers who responded to the survey and some of them also talked about the frustration of teaching their own children maths."

Traditionally researchers have suggested that maths was stressful, Dr Darragh said, but most parents did not report feeling stressed and yet still had negative experiences of home schooling maths.

However, Dr Darragh said the high income demographic of responders was likely to have played a part in the low stress results.

"The majority of respondents were Pākehā, well educated, high-income mothers who normally worked full time, so these findings would need to be complemented with research targeting other demographics also.

The survey also highlighted inequities in education, with a few reporting a lack of accessibility to online resources. In addition, more than 40 percent reported that they looked for their own online maths resources to supplement their child's learning.

Dr Darragh said this research wasn't just useful for understanding distance learning but rather to show what went well and what could be improved on in students' everyday learning.

"The first lesson is to open the lines of communication between schools and parents and make sure it's a two-way flow of information. In terms of homework practice, I think the little instructional videos that teachers put some time into producing could be something that becomes practice in the future."