A man has been arrested after he cut through fence ties in a 1.8 metre fence to break out of a managed isolation facility in Hamilton. 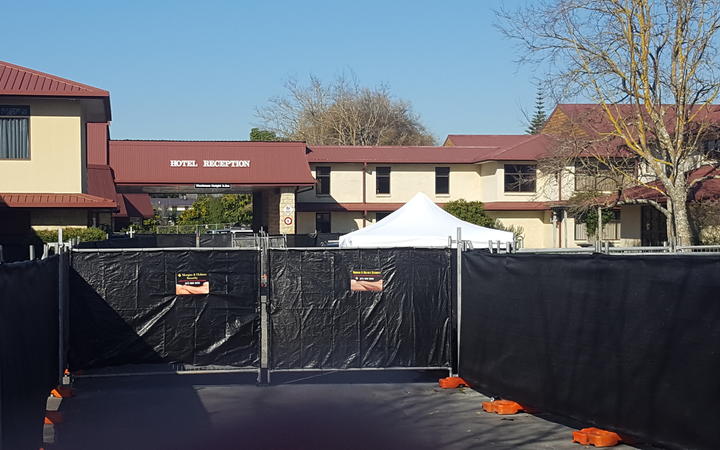 Police said it was believed the individual left the Distinction Hotel for about half an hour, between about 6.30pm and 7pm yesterday and went to a liquor store on Te Rapa Road.

He is now in police custody and will appear in court later today.

The man arrived from Sydney on 1 July. He tested negative on his day-3 test and Health Minister Chris Hipkins said this afternoon that a second test taken this morning returned a negative result.

He said he was also advised that there were no other customers in the store when the escapee was there, based on the CCTV footage.

Hipkins said he was advised there was a police officer present at the hotel but that the person left through a fire exit, then cut through the fence surrounding the facility.

Air Commodore Darryn Webb, head of Managed Isolation and Quarantine, said it was "important to note that the Covid-19 health risk has been assessed as very low".

"We have talked to one liquor store on Te Rapa Road where we believe the individual visited, and it has cleaned its premises as a result of our inquiries," Webb said.

"Police ensured no one entered the store this morning until health officials confirmed it was safe to do so."

The store owner has been told it was a "low-risk scenario" and it do not need to close.

People in managed isolation facilities are not permitted to order liquor.

"As we have said repeatedly - actions such as these are completely unacceptable. Returnees are given clear instructions and information about what their responsibilities are. Managed isolation is a critical part in our defence against Covid-19, and it is up to each and every person entering this country to play their part and abide by the law.

He said 27,723 people had gone through managed isolation since 26 March and the "vast majority" of returnees were taking their responsibilities seriously.

It is the third incident in six days where a person has absconded from managed isolation facilities.

On Tuesday night, a man escaped a hotel in Auckland and shopped at a busy central supermarket - he was later found to be Covid-19 positive.

And on Saturday a woman at the Pullman Hotel got out by climbing over a fence and absconded for about two hours before being found nearby.

Following the breaches, the government yesterday announced there will be a permanent police presence at every managed isolation and quarantine facility in New Zealand.

He said with all the measures and extra being put in place, people were still "popping out for a beer".

"New Zealanders have been through far too much for such a shambolic approach."

He said National would have had the right focus in terms of planning for it.

"They have always been at least a week behind, if not more, in terms of the demand on the system."