Megan Woods has signalled there could be more police involvement in managing returnees after two escapes in a week. 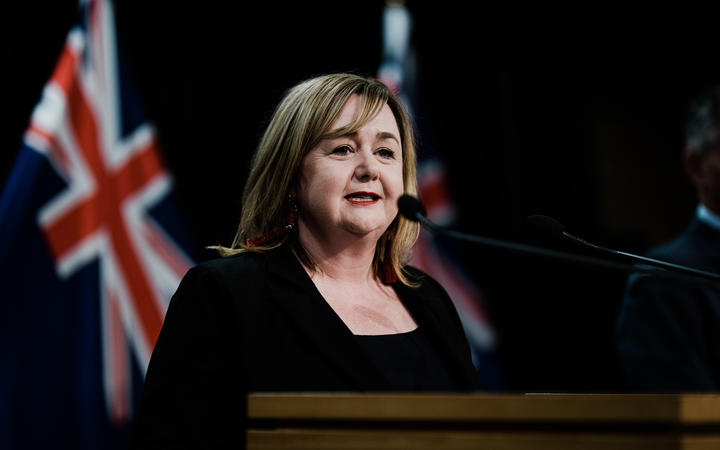 The minister in charge of managed isolation facilities, Megan Woods, told Morning Report that she will be making an announcement later today about whether there will be further police involvement in managing returnees.

"Only one group of people have the power to detain, and that's the police," Woods said.

Yesterday it was revealed that a 32-year-old man in isolation, who was awaiting a Covid-19 test result that later came back positive, strolled out the Stamford Plaza Hotel into the middle of Auckland city.

She said that, in this case, the security believed the escapee to be one of the contractors working on the fence, they can make changes such as not allowing people to use outdoor areas while there are works happening.

"One of the immediate reactions the team took yesterday was to review those policies, particularly around smoking areas.

"It's probably not appropriate to have someone in a smoking area when there's contractors on site and where it's not clear who's who. We're reviewing all of those things and we'll have more to say on that later today."

On suggestions people may have to book managed isolation facilities before they flew into New Zealand, Woods said it would be a "sensible way" to manage quarantine.

But in order for it to work there would need to be a system in which bookings and flights were co-ordinated, she said

Officials are still piecing together CCTV footage to work out the man's movements between a Countdown supermarket and the hotel.

Woods told Morning Report they are aware the man stood outside a store to tap into free Wi-Fi and made a 22-minute long phone call.

Public health expert Professor Michael Baker told Morning Report the escapees' behaviour was "egregious" but we should still look for systematic improvement to reduce the chance of breaches happening.

"In this instance, we've got the question of whether people coming into these facilities should be confined to their rooms until they've had their first test and it's negative."

Baker said that could be implemented now, with special provisions for people addicted to nicotine or other substances, for instance nicotine replacement therapy.

"Many smokers, if they're already planning a long flight, take this approach - and that would be one way of managing this risk."

Meanwhile, there are calls for clearer instructions over the role security guards should play at managed isolation facilities.

The New Zealand Security Association says members have received mixed messages and that security companies should be involved in planning security measures.

Chief executive Gary Morrison said security guards were under a lot of pressure - and on low pay.

"I'm aware from talking to some of our members that when they've gone into those roles, there hasn't been clear communication as to what needs to be done.

"Beyond that, you've got the most recent situation where security officers have limited powers ... security officers don't have powers of arrest or anything similar to that, so they may be limited in what action they can actually take."

Morrison said it might be necessary to have more police involvement in managing returnees.

He said security officers were on relatively low pay for the risk they were taking in these roles.

"Security officers are essential workers. They have performed right through that whole period ... it's very easy to criticise, but in the majority they do a fantastic job."