New Zealand has one new case of Covid-19 after a man in his 60s in quarantine after arriving from Pakistan tested positive.

The man arrived on Air NZ flight 124 from Melbourne on 13 June, he showed symptoms on 15 June and was swabbed the next day.

He is staying at the Jet Park Hotel, and was transferred there with his travelling companion after developing symptoms. There are currently 145 people staying there.

Director-General of Health Dr Ashley Bloomfield said the man wore a mask on all his flights and all passengers on the Air NZ flight are now being contacted.

"This is a case at the border, we will continue to get cases at the border. There is still a pandemic raging off our shores and the number of daily cases continues to be at a very high number around the globe."

The total number of confirmed and probable cases is now 1507, and there are now three active cases.

Dr Bloomfield said another significant cluster - connected to a Hamilton rest home - had now been closed. 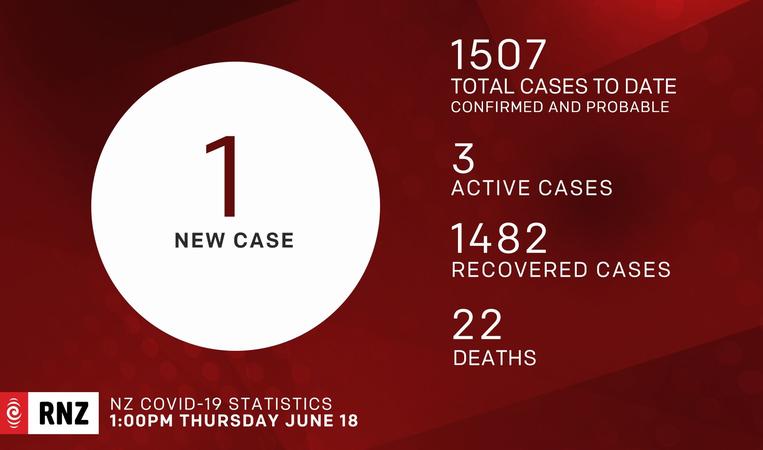 Dr Bloomfield also spoke about the two sisters with Covid-19 who were released from isolation to travel from Auckland to Wellington to visit a dying parent earlier this week.

He said one of the two friends who met with the two women had returned a negative test and the other test was still pending.

He said 90 percent of the 364 contacts of the two women, who also stayed at the Novotel Hotel in Ellerslie and were on their flight, had been contacted so far.

"There was a lapse in the process for us introducing the routine day three and day 12 testing in the latter part of last week and I know that the case of these two women will have upset people and shaken people's confidence.

"I've certainly been upset by it and I apologise that we've ended up in this position."

He said people should still trust what he said.

Prime Minister Jacinda Ardern yesterday said the situation was an unacceptable failure of the system and she appointed assistant chief of defence Air Commodore Darryn Webb to oversee and review managed isolation facilities.

Earlier today, Dr Bloomfield told Morning Report there had been a slip up in the process.

"I've taken responsibility and we are sorting it out. I'm sorry that that happened."

It was also revealed today that Covid-19 testing times and contact tracing in Auckland failed to meet the "gold standard" set by the Ministry of Health, according to data released to RNZ.