A five-yearly census has revealed Egmont National Park is experiencing a whio population boom and raised aspirations for its population beyond the park boundaries. 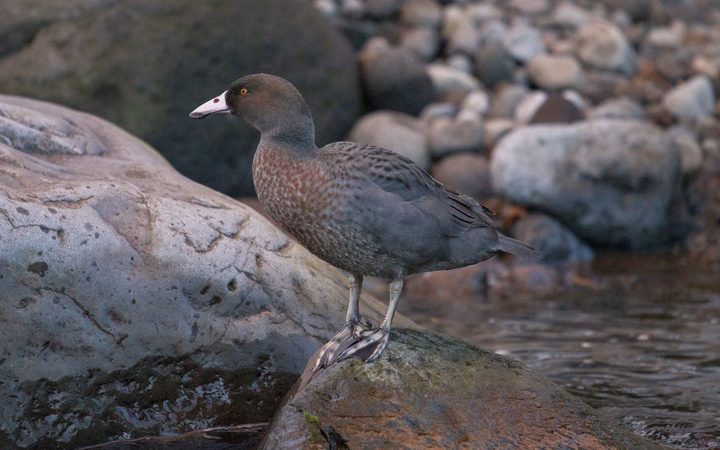 The whio (pictured) census, held between January and March, located 15 pairs in total, and another 18 single whio were also discovered as well as 17 juvenile birds. Photo: Tony Green

Department of Conservation biodiversity ranger Joe Carson said the 2020 survey monitored 11 new rivers in the park to see if the native blue ducks were moving into previously uninhibited territory.

"And of those 11 rivers there were whio in every single river and eight pairs were found to be breeding so it's spectacular it's certainly beyond our expectations that's for sure."

The census, held between January and March, located 15 pairs in total, and another 18 single whio were also discovered as well as 17 juvenile birds.

Carson said the whio were establishing new territories was a particularly good sign.

"It's awesome to see how well the whio are doing. Every river we surveyed had whio living there and several showed presence of fledged offspring. It is really exciting and has completely expanded our aspirations for ongoing growth of the whio population across Taranaki."

Whio are found nowhere else in the world and are rarer than some species of kiwi, but population in Taranaki has been growing with a 71 percent increase in ducklings located during the 2018/19 breeding season.

Fiercely territorial and a pair need about a kilometre of fast-flowing river or stream for themselves. Including birds at eight other rivers in the national park, which are monitored annually, it's now believed there are about 200 whio in the national park.

Carson said it was amazing to think just a few short years ago there were no whio in Egmont National Park.

"They were pretty much functionally extinct in the 1940s. The last confirmed sighting was about then and then slowly since the late 1990s we've been releasing captive reared birds and the population is booming.

"They just keep producing young and we were just hoping those young were settling and making their own territories and trying to breed and now we've found the evidence that they are and it's very inspirational actually."

Carson said intensive predator control, including the use of 1080, had laid the platform for the whio's revival and work was underway to maintain and increase trapping networks by another 8700 hectares.

"Without it stoats were just nailing all of our birds when we first released them when we didn't have a very good trapping network. Now the trapping is spread and it keeps expanding and then the 1080 drop last year as well.

"It's just provided the chicks, the ducklings and the nesting females that opportunity to survive and get the ducks away."

Taranaki Mounga acting project manager Sera Gibson paid tribute to the army of volunteers that had made the whio's success possible.

"Our team and volunteers have worked really hard to rebait the stoat control network before winter and we will be increasing predator control around the southern and western side along rivers later this year."