A government ministry was warned by engineers the bell frame in the National War Memorial Carillon could fail, and the bells could fall down and kill people in an earthquake. 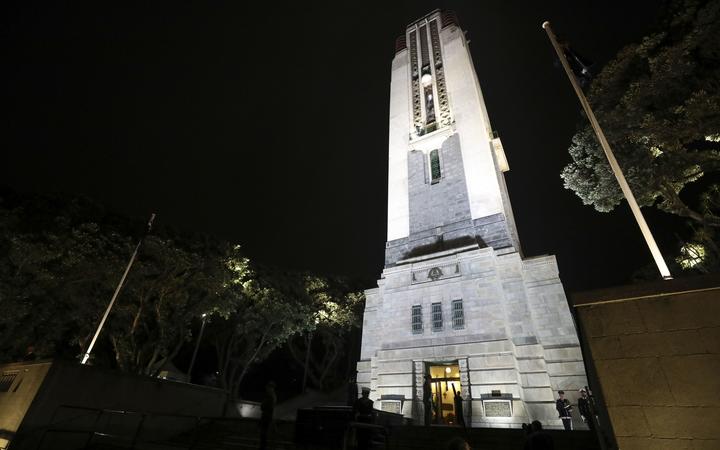 The National War Memorial carillon tower before the commencement of the dawn service in 2019. Photo: RNZ / Ana Tovey

The Ministry for Culture and Heritage was urged to check the bell frame in 2011, but documents show it took another eight years until it did so.

In the meantime, it reopened the Carillon to the public, and had the heavy bells put back on the frame.

Documents released under the OIA show that structural engineers Dunning Thornton told the ministry in 2011 that the 70 tonnes of bells posed a risk, including of destabilising the tower in a quake.

"The large mass of the bells means that they pose a risk to life within the structure should they come loose from their support frame, or the support frame fail," Dunning Thornton said.

"We recommend that an assessment of the bells' support/restraint is undertaken to quantify this risk."

In 2015 and again in 2017, reports from the firm reminded the ministry that the full check had not been done.

This was after the 45 metre-tall tower had already been closed for costly seismic strengthening that began in 2012.

The documents showed the ministry only got Dunning Thornton to do a full seismic assessment of the bell frame in August 2019.

Completed in April 2020, the assessment revealed the seismic work had failed to fix the bell frame.

It rated the frame so badly that officials were forced to shut the whole memorial.

That occurred in February this year, with the ministry not even waiting to get the final assessment report to shut it.

"The safety of our staff and the public is of paramount importance," it said in February. 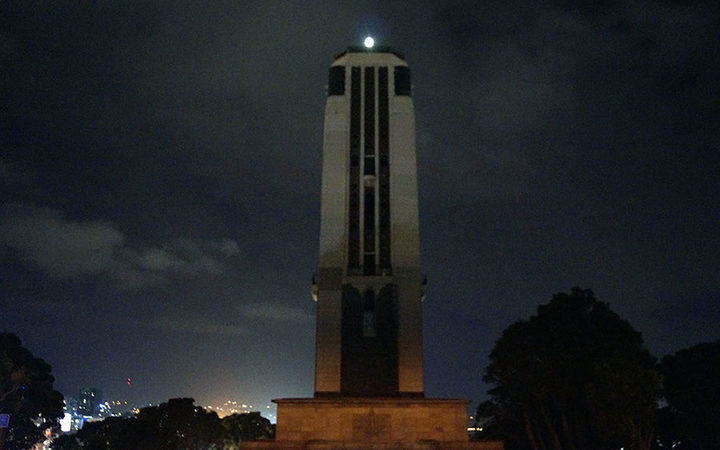 The ministry told RNZ last week the assessment had rated the bell frame at just 15 percent of New Building Standard (NBS) (15 percent of what a new building on the same spot could withstand quake-wise).

Anything under 20 percent NBS is considered 25 times more likely to fail under seismic load than if it met new building standards.

RNZ is aware that questions are being raised about whether the assessment and the memorial's closure are justified.

A peer review has yet to be done of the Dunning Thornton assessment.

Choirs and the public had been allowed to use the tower since it reopened after the strengthening in mid-2018.

The ministry told RNZ this week it was "comfortable" reopening the Carillon because it knew the tower's primary structure had an OK quake rating of 40-50 percent NBS (under 67 percent is categorised as "earthquake-risk"). 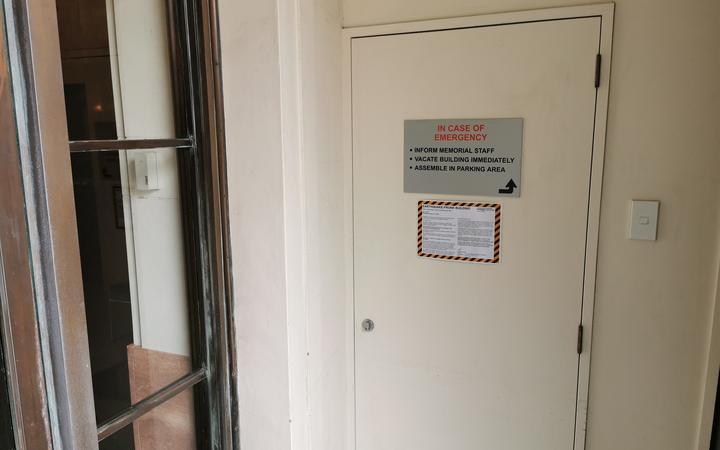 An earthquake-prone building notice inside the Carillon. Photo: Supplied by Wellington City Council

The closure in February is the latest of a series that have shut the country's best-known bell tower and hub of war commemorations to the public for years.

The Hall of Memories, behind and only accessible through the tower, was closed from 2012-2015, and the Carillon tower from 2012-18, for upgrades and seismic strengthening.

The Carillon bells and "organ" were totally taken apart from 2016-18 - 15,000 parts were dis-assembled then put back together by head carillonist Timothy Hurd.

This work took place despite the ministry knowing it had not assessed the bell frame properly. 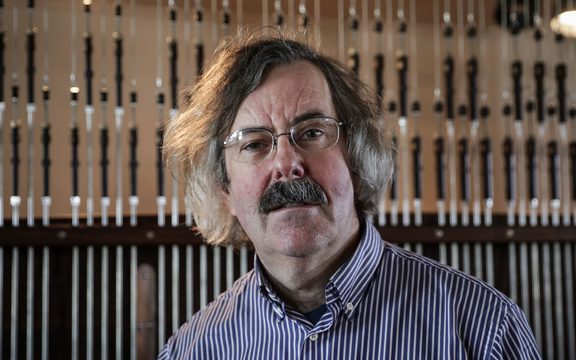 Hurd said in 2018 that as workers removed the bells they found the steel frame was "a lot, lot, worse than we had thought".

"So we have actually ended up replacing about 20 percent of the steel frame and all of the supporting headbolts, which were whittled down to somewhat under half of their original diameter."

The ministry in February said in a statement "the steel bell frame had corroded".

But not all of it was replaced.

"Some elements had rust removed and were painted as an interim measure, pending investigation of further steel replacements," the ministry told RNZ this week.

"Some angle bracing was treated in this way."

RNZ understands it is the angle bracing that is the weakest point.

A separate structural engineering firm did the work to remedy the corrosion, the ministry said.

The ministry said outside that work, it had received no advice that there were any issues with the angle bracing prior to the 2020 assessment.

Masses of anchoring concrete was poured during the strengthening and steel bracing added to the tower itself - its heaviest bell is over 12 tonnes - while the hall had been upgraded by 2015 to 100 percent NBS.

The ministry has so far not released the detailed seismic assessment of the Carillon despite being asked to since February.

It was currently looking at ways to reopen the memorial while keeping people safe, at the same time as assessing how to fix it fully, it said.

'Sound as a bell' - council

The Wellington City Council had on its files that the tower rated at just 11 percent NBS - judged by somewhat less strict seismic assessment rules in 2011 - because of unreinforced masonry.

But in 2018 it celebrated the tower's reopening anyway.

This was an "unfortunate choice of words given that our resilient staff have always known the building to be quake-prone", the council told RNZ yesterday.

It took the council till mid-2019 to record the 11 percent NBS rating on the Carillon's Earthquake-Prone Building Notice as required by law. 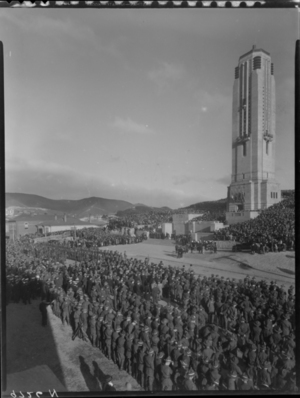 The ministry denied it waited years to get the bell frame checked.

It had "accepted the engineer's recommendation" for further assessment of the bell frames and other secondary structures, it told RNZ in a statement.

It did not say that this recommendation was first made in 2011, and that it acted on it only in 2019.

Dunning Thornton in 2011 made this recommendation; but as for a detailed seismic assessment of the whole tower, the firm instead recommended putting resources into interim strengthening in order to lift the Carillon's earthquake-prone status.

"It is not difficult to improve the tower's seismic performance to 67 percent", a key NBS threshold, it said in 2011.

The ministry told RNZ this week it had not expected the bell frames "to have such a significant impact on the overall seismic rating".

"Up to the point when the ministry received the draft [detailed seismic assessment] in February this year, it understood the Carillon tower to have an estimated overall seismic strength between 40-50 percent NBS."

The OIA documents do not support this statement.

In an email to the city council in August 2019, the ministry's project manager Brodie Stubbs said the tower's primary structure's rating was known, "but there are some unknowns for the secondary structure such as the bell frame".

Stubbs attached a 2015 letter from Dunning Thornton to the ministry, that said: "The building still remains potentially earthquake prone.

"This status will only be removed when the secondary elements have been addressed."

Those elements were the bell frame; quake rating "unknown - Outside our current scope. An issue with respect to building's EQP (earthquake-prone) status".

The ministry said it had acted "at all times based on the information it had at hand".

It was unable to provide a costing for the 2014-18 seismic strengthening of the Carillon.

"Ministry staff are currently working remotely and until we are able to access hard copy files it is not possible to give an accurate figure."