A campaign to stop Christchurch households from using their recycling bins to dump their smelly non-recyclable waste, is so far failing to change peoples' behaviour. 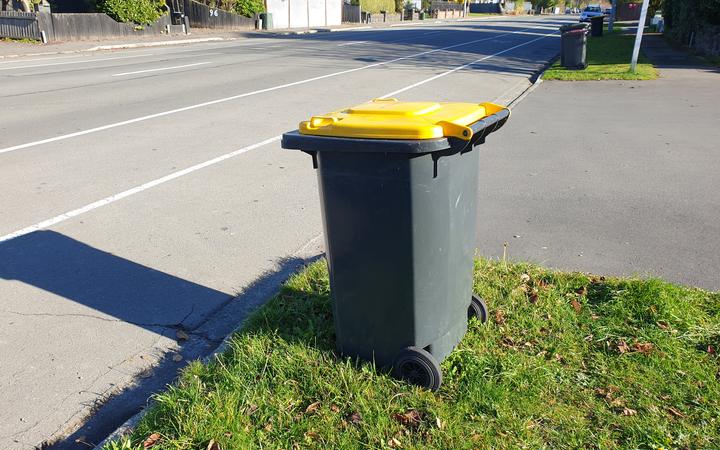 On Monday, close to half of all recycling collected in Ōtautahi had to be taken to the landfill, up from a third of it on Friday.

It took just a handful of yellow wheelie bins where a nappy had been tossed in with the cardboard and plastic for the whole truckload of recycling to be deemed a write-off and be taken to the landfill instead of the recycling plant.

"Unfortunately, we do have some people who are continuing to contaminate the recycling bin and it's things like food, green waste, nappies, clothing, items that obviously can't be recycled."

It all started when the council came out of lockdown.

During level 4 when sorting recycling was not possible, it had allowed households to use their yellow bins for general waste.

Once recycling was possible again, this stopped.

However, thousands of people had clearly not got the message and were continuing to double dip, using both their general waste and recycling bins to take out the trash.

"It really impacts on the people who are doing it right in doing the right thing. So it's very problematic at the moment because we haven't seen that change back to what we what we would have thought," Trotter said.

He said it may have been a mistake allowing households to use their yellow bins for their non-recyclable rubbish during lockdown.

"In hindsight, to have the behaviour change back to the way it was, we may may take a different approach on it, because certainly the cost now, certainly outweighs the advantage of having that convenience at the time."

The council remained determined to get on top of the problem.

From next week, the number of inspectors roaming the worst offending streets would increase from four to 16.

"They will actually physically go around on the streets and open up the bin, have a look at the contents of them and see if that is correct and the material in there is correct."

Nearly everybody spoken to on the streets of the city yesterday had an opinion on the wheelie bin debacle.

One resident Sarah admitted she was among those who had been using the yellow bins incorrectly.

With five children and a lot of nappies to get rid of, she said one solution would be to provide a bigger bin for general waste.

"That's basically a whole red bin of fortnight. And then you've got school lunches and stuff on top of that because the kids can't actually throw the rubbish out at school. So we dump it at home and there's just no room for it. So we do literally dump runs like once a month, as well as paying the rates and everything for the bins."

Another resident Rose had also been using the bigger recycling bins for her smelly waste, but said she had no idea her actions were costing the council so much money.

"I've got a naughty letter on my yellow bin so I'll have to play by the rules now, but after the earthquakes they didn't really care so I just kept on going."

Sheryl Johnston was shocked some had not been following the rules and were undermining the hard work of those who had been diligently washing their tins and milk bottles ready for them to be used again.

"I was horrified to hear her say that. We've got to look after our planet. I'm a big recycler, I recycle and I pick up rubbish on the beach and I look after our world."

Johnston said the council should never have allowed people to use their yellow bins for general waste in the first place.

The council was taking an educational approach so far but said repeat offenders who breached the rules for a third time ran the risk of having their bins taken off them.