A man has been arrested for smuggling 75,000 cigarettes and another man has been sentenced for Customs' largest-ever tobacco fraud case. 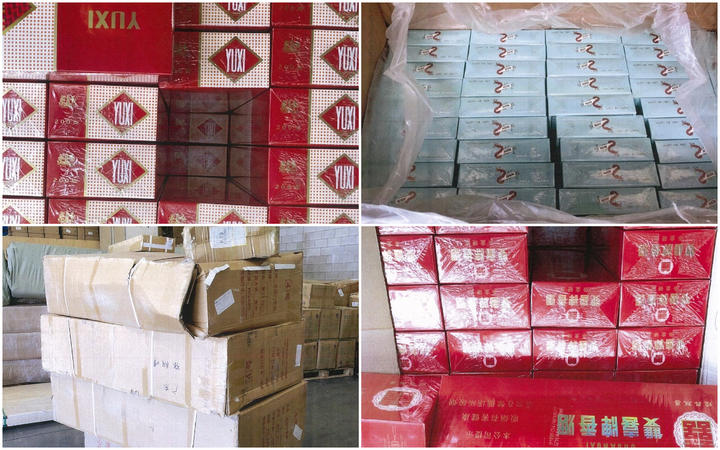 Customs said in a statement a man arrested in 2018 for smuggling 19,419,400 cigarettes and evading over $18.7 million in Customs duty and GST had been sentenced to five years and three months in prison.

His sentence comes the day after a 29-year-old Auckland businessman was arrested for smuggling 75,000 cigarettes, evading Customs duty and GST worth $83,365.

The Chinese-branded cigarettes were seized in January when Customs discovered them concealed in a sea cargo consignment of new household items.

"Initial enquiries found the name of the person receiving the consignment was a false identity. Subsequent investigations linked the shipment to the businessman, and showed the use of a number of storage facilities and post office boxes across Auckland that had been opened using false identities," Customs said in a statement.

"The storage facilities and P.O. Boxes were likely used to facilitate illegal imports, prior to the cigarettes being sold wholesale, using Chinese social media channels."

The man was arrested in Auckland yesterday and faces multiple charges relating to tobacco smuggling. More charges are likely.

Customs Investigations Manager Bruce Berry said the number of illegal tobacco seizures had increased substantially in the past few years and the latest case was an example of an ongoing trend seen during the Covid-19 pandemic.

"Organised crime groups and individuals have been somewhat constrained in their ability to smuggle tobacco, due to Covid-19. Nevertheless, Customs has continued to seize considerable amounts of illegally imported tobacco in recent months, both in sea freight and international mail."

From January to the end of April, Customs had made 374 interceptions, adding up to 977,637 cigarettes or cigars and 65 kilograms of loose tobacco. Another 592kg of tobacco products had been abandoned by those who did not want to pay taxes.

Berry said changes to tobacco legislation, which come in effect from 1 July, will give Customs greater ability to take quick enforcement.

Passengers arriving into New Zealand with tobacco did not need a permit and individual duty-free tobacco limits were unchanged.