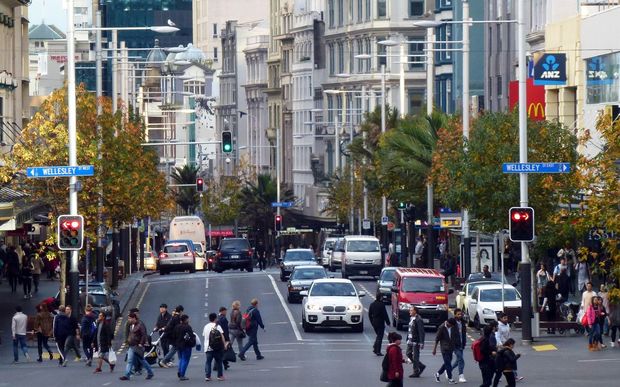 As part of Auckland Transport's (AT) Safe Speeds programme, there will be lower speed limits for about 600 roads in Auckland's city centre, and on some roads in the Rodney local board area and in the Franklin local board area from 30 June.

In 2018, 54 people died on Auckland roads and an additional 595 were seriously injured. In each of these crashes, speed determined the seriousness of the injury.

The speed limit change is part of road safety improvements AT is taking to bring deaths and serious injuries on the Auckland road network to zero by 2050.

To keep road users and residents safe, and to make speeds survivable in case of a crash, most speed limits will go down from 50km/h to 30km/h.

However, Nelson, Hobson and Fanshawe streets will each have a new speed limit of 40km/h, down from 50km/h. Some shared streets like Federal Street will continue to have a 10km/h speed limit.

The changes also include speed limits on State Highway 22 from Drury to Paerata.

AT executive general manager of safety Bryan Sherritt said the agency wanted to make Auckland's roads safe for everyone - whether that was people walking and cycling, kids outside schools, senior citizens or people driving.

"People often value to the time they've lost in traffic way more than it actually is [worth]. What we're talking about here is adding seconds to your journey time for the opportunity to save people from being killed or seriously injured, so it is a fairly simple equation," he said.

"Setting safe speed limits is just one part of a significant road safety investment between 2018 and 2028.

"We can all make some minor changes while we drive … because everyone deserves to get home safely."

Bike Auckland chair Barbara Cuthbert welcomed the change and said the lockdown showed how people were more inclined to get active if the roads were safer.

"If the roads are quieter and safer, more people will ride bikes and walk, so we've got a way more connected and healthy community."