Motorists in parts of the North Island are being warned to drive carefully after heavy rain and wind downed trees and caused slips. 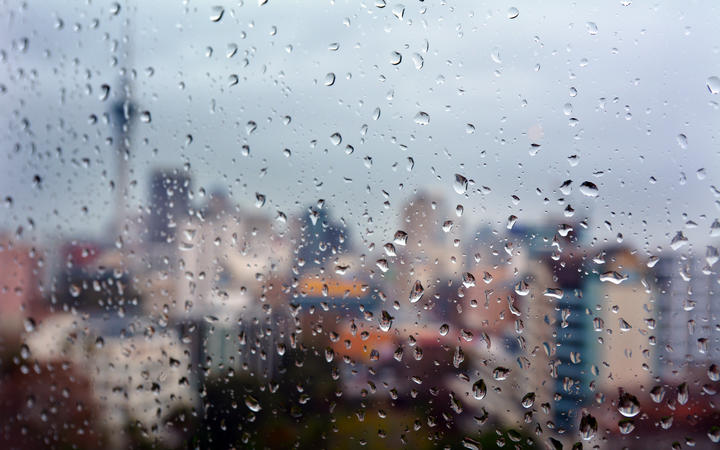 A stormy day overlooking Auckland's CBD. The city is just one region to be hit by stormy weather. Photo: 123RF

It comes as a deep low and associated fronts are expected to move south over the upper North Island during Monday. MetService said the system was forecast to bring rain and strong east to northeast winds to much of northern New Zealand.

In Waikato, a large tree had fallen on Manaia Road along State Highway 25, blocking both lanes of the highway.

The road is closed and drivers are being asked to avoid the area.

In the Coromandel-Thames district, holiday makers are facing lengthy traffic delays as the region is also blasted with heavy downpours and wind.

High tide was also due at 3pm today, which could lead to further flooding and road closures, he said.

Contractors are onsite to manage traffic due to multiple small slips and debris on roads throughout the region, including on Kopu-Hikuai and Tairua-Whitianga roads.

MetService's heavy rain warning is in place until 6pm, and rain continues to fall across most of the North Island.

Where has seen the most rain? Graphic shows 24 hour totals to 7am, from gauges and gauge-corrected-radar data. More rain to come for Coromandel and Bay of Plenty, and spreading into Gisborne. Rain eases for Northland this morning. https://t.co/qHyE5zhh6X ^TA pic.twitter.com/r2uk0MFkzd

Rainfall has been hugely varied for parts of drought-stricken Northland in need of drenching dry land.

Despite moderate to heavy rain in the last 24 hours, there have been no flood-related emergency call outs.

MetService said in the east of Northland there was up 120mm of rain compared with the west which had about 10-20mm.

Whangārei had received the most rain in the past 24 hours, MetService said, reaching 87mm.

Kerikeri had 84mm of rain, while Warkworth and Whitianga had between 51 and 57mm.

A MetService spokesperson said rain had eased in the area and it would be a welcome relief for many farmers.

However, Northland farmers are still desperate for more rain, and say it is still not enough.

Northland Federated Farmers president John Blackwell said some areas had more rain which was long overdue but overall it would only make a slight difference.

He said the rain had come too late and the grass was the shortest it had been, which meant the financial impact would be felt for years to come.

In the South Island, Dunedin drivers are being warned about black ice on the roads.

The police say there have been two minor crashes on the northern and southern motorways in Dunedin this morning.

Black ice is believed to have been a factor in both crashes and a grit truck has been dispatched.

MetService is forecasting there will be a cold snap on Friday, with even colder air due at the weekend, setting the tone for likely a colder, drier week next week.