New Zealand Defence Force (NZDF) bases in Auckland are reducing their water use as the region battles one of the worst droughts in recent history. 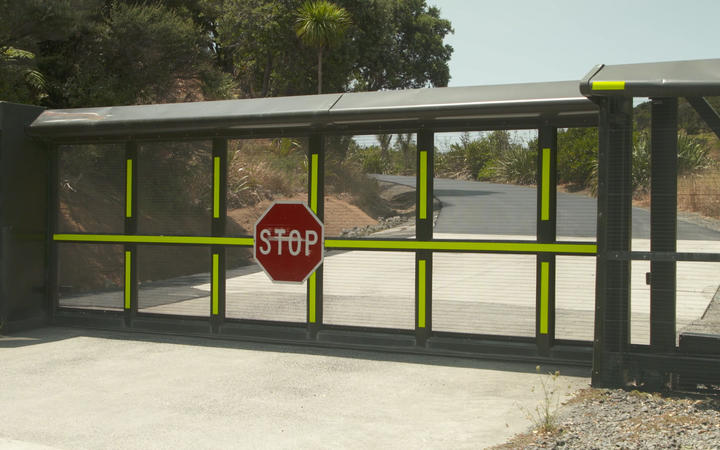 The Defence Force training base at the end of the Whangaparāoa peninsula. Photo: RNZ / Nick Monro

The taps are being turned off at Devonport Naval Base, RNZAF Base Auckland at Whenuapai, Papakura Military Camp and Ardrmore Training Area, which the NZDF said was saving thousands of litres a day.

Base Auckland's Rescue Fire Service (RFS) had to rethink training - to focus on "dry training" like physical and driving training and cutting open cars.

The team normally tests vehicle water cannons every morning but that was reduced to once a week, which still ensures they can respond to an incident and keep up training requirements.

"Our vehicles carry 6800 litres of water, which we generally use every morning to make sure they are working properly and to train with," said Base Fire Master Flight Sergeant Nick Wyld.

"We have also sent some people down to Taranaki to a civilian training area, which doesn't have water restrictions, and they can use the facility there."

Wyld said the RFS was probably saving about 7000 litres a day minimum by changing its training regime.

The base commander, Group Captain Andy Scott, said the base stopped washing all buildings and windows and watering of sports pitches and other green spaces in March.

"Our vehicle fleet won't be washed anymore and we have reduced the amount of water we use to wash our aircraft, which is now only done after they have been flying over corrosive sea water," he said.

"We have also closed our swimming pool, moving our sea survival training to the Waitematā Harbour.

"RNZAF Base Auckland is proud to be a responsible member of our local community, and will continue to look for more ways to conserve water and help the region through this period of drought."

At Devonport Naval Base, Commander Angela Holland said they were working closely with WaterCare on long-term actions to reduce water usage.

At the Sea Safety Training School, water was being recycled three days a week with fresh water uses on two days only.

The Dry Dock wash down was using salt water and all building, window washing and irrigation was stopped.

The Base swimming pool was only open for essential training.

"These measures will result in a significant reduction in water usage at the facility," said CDR Holland.

At Papakura and Ardmore, vehicle, building and window washing has been stopped.

Defence Force personnel at all Auckland bases were also being encouraged to conserve water at home in their communities by the required 20 litres per day.