For the fifth day in a row, there are no new cases of Covid-19, the Prime Minister says it will not be too long before trans-Tasman travel is able to resume, GPs push for balance between face-to-face and online consultations and Australia recorded its youngest victim of Covid-19. 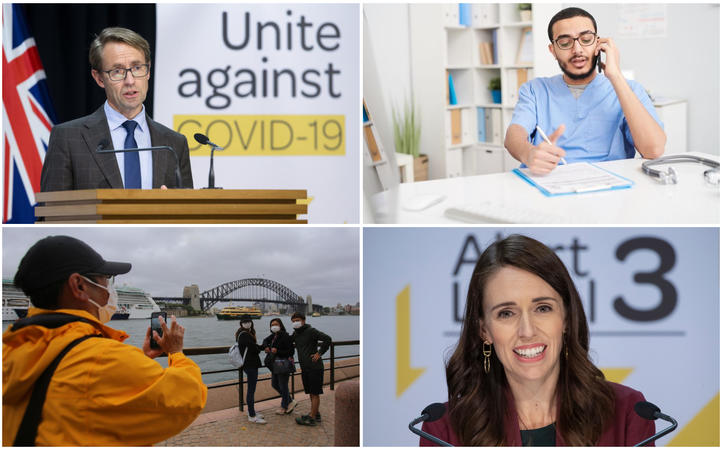 New Zealand does not have a single person in hospital with Covid-19, as the country marks five consecutive days without a new case.

At the latest Covid-19 update, Director-General of Health Dr Ashley Bloomfield said the one person who had been in hospital with the coronavirus had been discharged, meaning there was no longer anybody receiving hospital care for it.

There has now been five days with no new cases, and there has been just one case in the past week.

The total number of confirmed cases remains at 1154 and there have been no further deaths. Only 21 people in the country still have Covid-19.

He said New Zealand was staying at alert level 2 to be certain that there was no further spread of Covid-19 and also to ensure border procedures were safe and secure.

Another 17,000 people have registered on the NZ Covid Tracer app, bringing the total to about 422,000 people.

The Health Ministry is launching another app today called Āwhina, which is designed to provide advice to health professionals, including case definitions.

A group of government and business representatives will deliver a blueprint on how a trans-Tasman bubble could work early next month.

The Trans-Tasman Safe Border Group has been co-ordinated by the Australia New Zealand leadership forum and has involved representatives from both sides of the ditch.

Prime Minister Jacinda Ardern said the group was considering every aspect of a passenger's journey, "including pre-flight health requirements and eligibility, protections on board an aircraft, movement through airports, contact tracing requirements once people enter their destination".

While there was "enthusiasm" on both sides for this to proceed as soon as it is safe to, Ardern said she did not think either country was ready yet.

But Deputy Prime Minister Winston Peters was frustrated at the speed at which the bubble was moving, saying that he believed it should have been operational already.

GPs push for balance between remote and in-person consultations

Consultations with doctors over the phone or by Zoom have proven much more convenient for some and GPs are arguing they should remain, but not in all cases.

With Covid-19 and the lockdown forcing people to take particular care not to infect their doctors, or others in waiting rooms, GPs needed to adapt to a new way of doing things.

Remote consultations became the norm, but with restrictions lifting the Royal New Zealand College of General Practitioners has published a manifesto that argues that a return to normal would be a mistake.

College president Samantha Murton said there were several benefits to having remote consultations that went far beyond reducing the risk of spreading disease.

She said remote consultations could be beneficial for those who live in rural communities, as well as quicker for people who may find it difficult to get time off work to attend an appointment and those who are travelling and want to see their regular GP can do so online from a different city.

The government yesterday announced a $37 million Covid-19 vaccine strategy aimed at helping national and global efforts to create and distribute a vaccine to fight the coronavirus.

"We have a couple of potential [vaccine] candidates that will be ready in a few weeks, hopefully, for testing in some animal models," Ussher said.

Of the government funding, $10m goes to research in New Zealand, $5m is set aside to invest in the production of an eventual vaccine, and more than $20m will be for research projects overseas.

There are fears Aurora Energy's $400 million upgrade to its network will disproportionately affect those least able to afford it.

Under the Dunedin City Council-owned company's proposal, line charges may increase by up to $500 a year.

But with the economic effects of Covid-19 wreaking havoc in Queenstown Lakes and Central Otago there are calls to revisit the plan.

The company was fined almost $5m earlier this year after excessive outages between 2016 and 2019.

To fix the network, the company has proposed an upgrade strategy which it will submit to the Commerce Commission next month.

Australia recorded its youngest victim of Covid-19 after a 30-year-old man with underlying health conditions died in Queensland state, having shown symptoms of the disease for weeks but without getting tested, officials said on Wednesday.

The latest case brings to 103 the number of deaths recorded in Australia, from more than 7100 cases. The country has been among the most successful nations to contain the coronavirus spread, which officials attribute to early travel restrictions, social distancing measures and widespread testing.

Authorities were tracing a possible link between the man and the Ruby Princess cruise ship which docked in Sydney in March and was responsible for Australia's biggest outbreak of the virus, Queensland state officials said.

The heat wave, which officials say is likely to last until the weekend, comes even as the region struggles with rising Covid-19 infections and swarms of locusts that are ravaging crops.

Officials have warned people to stay indoors as far as possible, BBC reports.