For some trans and non-binary New Zealanders, Covid-19 has prevented them gaining access to gender-affirming healthcare. 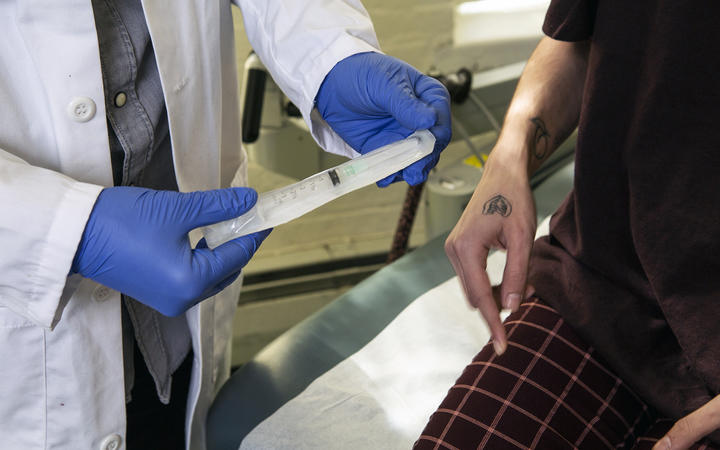 Kate Weatherly has spent most of the past year overseas, racing in the world cup mountain biking series. In September she flew back to New Zealand, two months before she was due to undergo gender-affirming surgery.

The surgery was scheduled to go through the public health system, but while Kate was out of the country, the DHB cancelled it as it wasn't seen as a priority.

Having already spent 12 weeks unable to do much because of a neck injury at the world champs, Kate's dysphoria was the worst it had been in a long time. It's usually something she can keep at bay by training and keeping busy.

Kate decided it would be best to go private rather than wait and push for publicly funded surgery. The Ministry of Health has been able to fund gender-affirming surgery since last year, with the surgery provided in the private sector but the Ministry itself recognises the waitlist for this is long.

Going private meant Kate's surgery could be booked for 8 May.

"When everything went sideways with Covid-19 it was pretty clear that my surgery was going to be delayed."

A week into lockdown, the private practice contacted Kate to tell her the surgery date would have to change but once the country entered level 3 they could give her a new date. Kate still hasn't heard anything.

The four weeks in lockdown and the first week of May were pretty hard for Kate.

"Although our health boards deem it an elective surgery, having my surgery cancelled/postponed twice has been devastating and has had a huge negative impact on my health and wellbeing.

"I've done my best to keep busy and being stuck at home with not a lot to do is already hard but knowing the life-saving surgery you've been waiting years for has been moved again is pretty heartbreaking."

For Jackson*, life in lockdown probably looked a lot like the other 13-year-olds at his school; apart from schoolwork and homework he got to do some of the things he enjoys - and did a lot of baking.

But lockdown also prevented Jackson from being able to access essential gender-affirming healthcare.

Jackson's at the age when kids typically do a lot of growing - pretty quickly a kid can go from always being put at the front in group photos to towering over their peers.

Jackson and his mum felt he was ready to talk to a medical professional about puberty blockers.

His mum has been searching for a GP who would be supportive of her son and in October she made an appointment for his first consultation.

When the country went into alert level 4, and into lockdown, Jackson's mental health referral letter was already a week overdue. Receiving this would mean he could move forward in the process and be referred to an endocrinologist.

Jackson was due to go in for an interview in the first week of lockdown, but his mum got a phone call to say this couldn't go ahead.

Jackson knew from the beginning it would be a fair wait before he could start blockers, he says Covid-19 came at an unfortunate time for him.

A lot can happen in two months for a 13-year-old and the delay in accessing healthcare has meant he's started to notice a range of physical changes. He's looking forward to starting blockers and not developing more feminine features, he said.

Jackson's lucky, his mum says having him home during the lockdown meant they were able to give him the support he needed and provide explanations as things changed. Not all family situations are safe or supportive for trans youth.

At the beginning of lockdown Jackson's mum started enquiring about getting her son a binder he could wear to ease his discomfort as he experienced changes. But binders weren't classed as essential items and the stockist couldn't take orders at that time. Jackson's only just received one in the mail.

When it did arrive, he was pretty excited to try it on and see what difference it would make.

His mum said he was filled with joy and she even got a hug - pretty rare these days.

The healthcare system can be difficult to navigate for trans and non-binary New Zealanders.

Not all trans and non-binary people choose to medically transition and for those who do there's not one medical pathway, the process is different under different DHBs.

'I'm terrified of running out'

At the other end of the country, Skye* waits to hear from medical professionals who are able to prescribe them hormone replacement therapy (HRT).

With every day that passes, Skye gets closer to running out of the supply they have.

Skye has been funding their own hormone replacement therapy, prescribed by their GP, since the end of 2018 but costing upwards of $80 every six weeks for their prescription, it's an essential medical expense they can no longer afford.

Almost a third of people who haven't been able to access gender-affirming hormones say cost is a barrier.

In January Skye decided to go through the DHB system to access HRT as it would help to alleviate the financial pressure they were under.

In early March, they were told by a DHB contracted psychologist it would take six weeks to draft and finalise a letter of recommendation that would then be sent to an internal medical specialist. Once the letter was with the specialist, a prescription could be written.

But just weeks later the country went into lockdown and on 8 April Skye was notified the psychologist's practice was on hold and the process would be delayed. A timeline for when they could expect it to start again wasn't given, and they've heard nothing since.

Skye understood Covid-19 would cause delays in healthcare but the uncertainty of when they'll have access to HRT is causing extreme stress - the little supply they have will run out next month.

"I tried rationing my already low dose of HRT by skipping doses. This caused a major dysphoric depression in the middle of the lockdown…"

Since starting the process for DHB-funded HRT, their financial situation has become even more precarious, they've lost a major source of income because of the pandemic and are teetering between the wage subsidy and future work.

"Every time I take my dose carefully, I look at my container with a kind of fear, I'm terrified of running out."

Skye says being funded for HRT could mean the difference between being able to buy food, and not being able to.

"I don't want to choose between a medication that helps me stay stable and other essentials like food or my phone bill - but if I have to, I will."

In a historic statement this week, 96 United Nations and international human rights experts recognised that rainbow communities will be deeply impacted by the Covid-19 pandemic, stating that unless urgent action is taken, the impact will be felt over generations.

They called on governments to urgently take into account the impact of Covid-19 on these communities when designing, implementing and evaluating the measures to combat the pandemic.