A new kind of activism is emerging from people taking their cares to the kitchen and pummeling dough, and it's called rage baking. 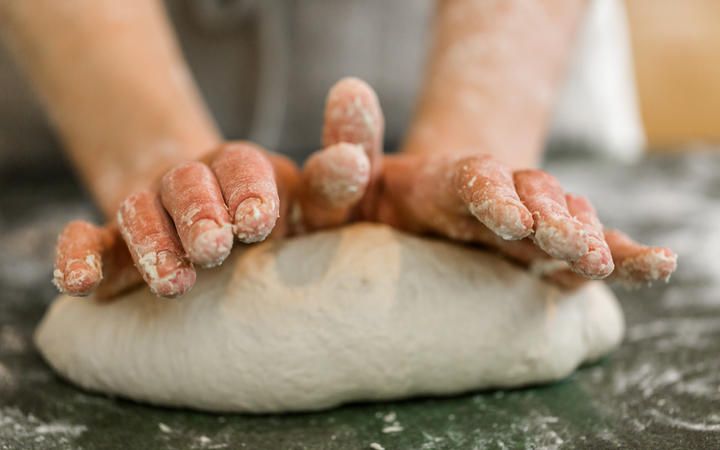 Coined in the United States by chef, activist and author Kathy Gunst, rage baking is all about letting out your steam at whatever political or pandemic situation is making you mad and creating something (hopefully) edible.

Now the hashtag #ragebakers has a following of like-minded kitchen hacks, including myself.

It makes sense to Auckland based poet Elizabeth Kirkby-McLeod, who has been making sourdough as an act of protest for years.

When New Zealand sought solidarity in sourdough during lockdown, she saw it as reclaiming the bread for home bakers.

"A lot of the books are written by male celebrity chefs and one of the books had a recipe that stretched 13 pages for a simple sourdough and so then I was like 'this is beyond me, this is crazy, there's no way I can do this'."

McLeod has a theory that artisan bread has been commercialised to make it seem out of reach for home bakers.

"I would argue it belongs more to the world, historically, of women," she said.

"That's one of the things that annoys me about the current bread culture is it doesn't pay any homage or respect to the mothers and grandmothers over centuries who have kept sourdough starters alive and bread making alive and have fed their families and nurtured their communities."

When the country learned it would enter level four restrictions at the end of March, flour was one of the items on everyone's shopping list. The run on supermarkets' baking isles was well documented: by mid-April Foodstuffs had sold 1500 tonnes of extra flour, the cost of bread-makers leapt on TradeMe and flour mills stepped up production to meet the sudden surge in demand.

The anecdotal evidence on social media points towards generations of New Zealanders discovering how easy it is to make bread.

"I think that by making it more scientific, more complicated it seems that unless you have a temperature controlled kitchen and to-the-gram digital weight and all the specialty equipment that it would be beyond you, but it's not and if it was as complicated as it is made out to be then how have women been feeding their families for millennia across the world?"

In the book Rage Baking: The transformative power of flour, fury, and women's voices, Kathy Gunst and co-author Katherine Alford set the scene for writers and chefs to discuss the healing powers of baking from a starting position of "mad".

Written before Covid-19, it has been a handy resource for my own quarantine baking attempts.

Gunst said she took refuge in her kitchen as a way of dealing with the political climate in the US. She took pictures of her baking with the hashtag #ragebakers.

"Did I make the connection between my rage and this newfound interest in/obsession with baking? I'm honestly not sure, but it felt like something I had to do," Gunst said.

She said baking did not stop the rage she felt at the political administration of her country, but did reset her focus for a few short hours.

"It became a balm, a meditation of sorts. Baking was a way of temporarily restoring my belief in the positive transformation of things - in this case, butter, flour, sugar and fruit," said Gunst.

Daily Bread is an Auckland institution for artisanal sourdough made from a starter passed down through generations of master baker Patrick Welzenbach's family.

A 22nd generation baker from Germany, his family has over 600 years in the profession, which he is carrying on as the bakery's co-owner and executive baker.

"I feel baking bread is an amazing process and it's really interesting. It's really time consuming and during lockdown everyone had a lot of time," said Welzenbach.

"It's a really exciting thing when you bake something and get bread at the end from flour. That's the reason."

He agrees with McLeod that baking sourdough at home is easy - but as an award-winning baker he said it would not be the same quality as a professional bakery's artisan bread using specialty grains and temperature-controlled processes.

"I would say it's not easy to bake a really good sourdough - it's a really long process and you need a lot of skill - but I'm talking from a high-quality level I have really high expectations of bread it should be always the best," said Welzenbach.

"When you bake at home and your bread comes out of the oven and the whole room smells like hot bread and you cut it,, it's not so important for you if it's not so big and fluffy -because you did it. It's really special to you."

"You don't need any machine, you just need a bowl and your hand plus time and the ingredients

"Now it's like a step back to the old tradition in making sourdough and I would say it's just the beginning."

McLeod said more people have realised how easy it is to make. She makes her sourdough every week, keeping the starter in the fridge between loaves.

"It's an easy thing to be generous with both in terms of the starter and the skill and it binds you with these other people as a shared thing that you do."

She's given a dozen starters away over the years.

"Let's just say that I've only ever shared my sourdough starter with women and if I shared it with a man I'd probably insist he sign a contract that he's not going to start a fancy micro-bakery and try to get famous off it."