After eight weeks out of the classroom, students and teachers admitted to excitement and a bit of nerves.

In Auckland's Mount Albert, hundreds of teenagers filled the footpaths again as they made their way to school.

Marist College was at the centre of the country's second-largest cluster of Covid-19 - with 96 cases linked to it.

Over the last fortnight, staff, students and their families have been offered free Covid-19 testing and more than 900 tests have been completed.

One parent, Michelle, says it was reassuring her family was able to get tested.

"As a parent you also need to look after your kids and check about those symptoms," she said.

Marist College has been working with public health authorities to make sure it has exceeded all the distancing and hygiene requirements it needs to before reopening today.

Michelle said that after seven weeks at home, her two daughters were looking forward to getting back to school.

"Very excited, they woke up very early, last night they prepared their things, their lunchbox they had already prepared it."

At Wellington High School, principal Dominic Killalea had a metre-long ruler on his desk to help with physical distancing measurements.

He said the focus this week would be on getting everyone used to a new routine.

"Our students will hand sanitise when they come into class, and they'll be cleaning desks at the end of that class. So just stopping five minutes before the end of the class and getting into that pattern of doing that," he said.

Year 13 student Lily-Mai Parkin said she was "insanely excited" about coming back to school, but admitted to nervousness about distancing from other people on the bus.

She said her fellow students were displaying a range of reactions to the return to class. 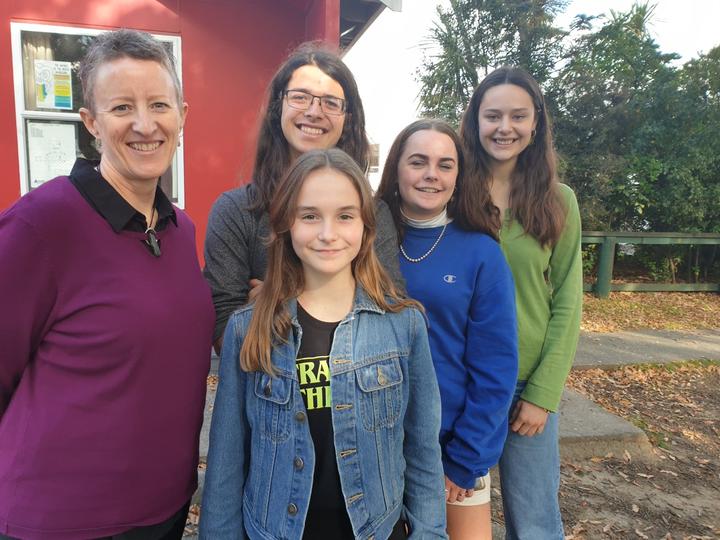 Year 9 student Sophie Leadbetter admitted she had been nervous about coming back to school.

"I was excited because we get to see our friends again, but I was a little bit nervous to see the teachers because we've been in quarantine for so long," she said.

Year 13 student Xandi Gobbi said it was good to see fellow students, though he would miss sleeping in and working at his own pace during lockdown.

Fellow Year 13, Willow Ashby, said: "Definitely in the weekend I was a little bit nervous about coming back to school, but I woke up this morning and I was so excited."

At Christchurch East School this morning, Jay Kumar was still uneasy about sending his six-year-old daughter back to the classroom.

"We had a bit of a break, but I'm still not 100 percent sure if I should bring my daugther to school, because the virus is still here and there's no vaccine or anything.

About 80 percent of students return - Minister

Education Minister Chris Hipkins said today 209,759 students were reported as attending school, about 80 percent of students across the country.

Principals' Federation president Perry Rush said some members of the organisation, which represents primary and intermediate schools, were reporting turnouts as low as 37 or even 30 percent.

However, Rush said some of the principals reporting low turnouts said they have been told many of the absent children would come back to school next week.

He said it was difficult to tell why some schools had low turnouts, while others had nearly all of their children attending.

Auckland's Macleans College principal Steven Hargreaves said he sent out minivans this morning to pick up students he expected would be left in the lurch.

"We only had two that we needed to pick up in the school van and what we noticed was a huge number of parents driving their children to school and dropping them off in the streets around the school."

Hargreaves said students were up to speed on hygiene rules.

"The students seem pretty well aware of it, they were spreading themselves along the footpath while they were waiting for the pedestrian crossing to go green for them, so they're onto it and they've come back in big numbers too."

Wellington High's head of science Nicola Dow said the return to near-normal schooling had been great for teachers, but admitted to a few nerves.

"I'm part of the pandemic planning at school, so most of my emotions this morning was [feeling] very anxious about: Did we get everything right? Have we got hand sanitiser in all the rooms? Did we get the disinfectant right? Have we got the posters right? Is everybody going to follow the rules?" she said.

Karori West Normal School principal Janice Shramka said nearly all the school's children returned to class today and they and their families were observing the school's distancing and hygiene instructions.

"I couldn't be more pleased with how it's gone," she said.

Dropping off her two boys at school, Erin Jourdain admitted to mixed feelings about the end of lockdown.

"They've been a bit upset, but actually they went fine when they got here. I think it's just been the anxiety of not knowing what to expect. It's been a long time."

Inside, children in a Year 4 and 5 class said they had been looking forward to returning to school, but there were some complaints.

"I'm excited and nervous. I'm nervous just because of all these precautions, but I'm excited to be seeing my friends again," said one child.

"I want to go home because I got used to staying at home," one boy said.

"I'm annoyed that we have to get up at a normal time this morning and I can't sleep in," said a girl in the class.

In the new-entrant classroom, teacher Amanda Wills said the school's youngest children were adjusting well to being back at school.

"I don't normally work on a Monday but I've come in to see the children because I've missed them so much," she said.

"It's a little bit different. We have some different routines, and the parents have to say goodbye without coming into the buildings. But the kids have really stepped up I guess, being really responsible and mature," she said.

The return of early childhood education

It was not just school children who were back in class today. Early learning services also reported 36,780 under-five year olds attended today, averaging out to 53 percent.

At Newtown Kindergarten Marti Renton said she was happy to be reunited with some of her favourite outfits.

"I really, really did miss the dress-ups because I love them," she said.

One of the kindergarten's teachers, Catherine Vaughan said everyone had adjusted well.

"It's been really fun seeing all the families and the children. Most of them are really happy, running in, happy to see their friends, happy to see us."