The end of alert level 3 also means the end to seven weeks of working from home for many people. 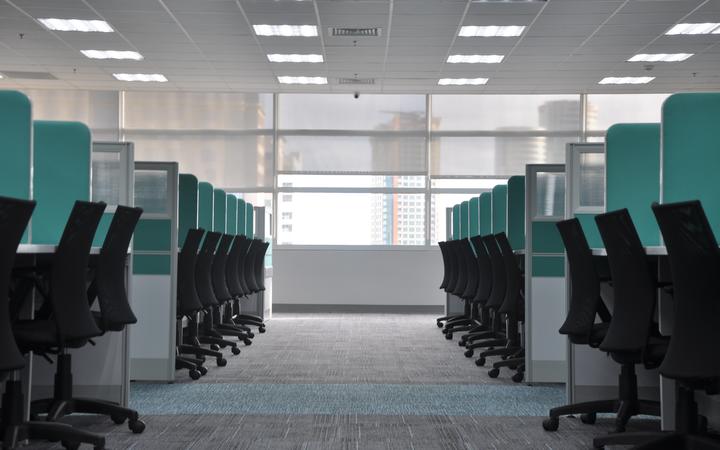 But workplaces will still be required to maintain physical distancing for staff, and some workers are just not comfortable with the idea of a return to the office.

Shared office space companies are working out how to get the workspaces functioning safely and hotels are allowing day rentals for people who fancy a change of scene, but aren't keen with embracing social interaction just yet.

Working from home has presented unique challenges for everyone - whether you're a teacher trying to teach a class full of kids over video, while your own kids are running around in the background; or you're a mayor trying to mediate a livestream meeting with 10 or so other councillors.

So the news that offices will be re-opening has brought relief to many - a change of scene, and new people to interact with.

For the co-director of graphic design company Scratch Design, Kendal Morgan-Marshal, working from home was tricky for their team of five.

"The creative collaboration between us, it's normally quite a natural and organic process," she said.

"When we do come together for our creative brainstorms, they're really positive, uplifting moments.

"Having to do that remotely, it's definitely been a lot more structured and organised, so you just lose that natural, organic kind of process."

Their office is a shared working space, The Settlement, based in Petone in Lower Hutt.

It is a space which suits them to the ground, Morgan-Marshal said - from the aesthetics, to the company - that they just have not experienced while being at home.

"We've created a home that looks nice and feels nice to be in," she said.

"That's just who we are, and The Settlement is very much like that too - it's a beautiful space to work in.

"We know people have had their challenges, one of our team he's been working up in his bedroom while he's got three little children running around downstairs that his wife is looking after."

With plans to return on Monday, she said the whole team was excited to go back.

"I think we'll just look forward to being back together again. We've just missed that natural energy that comes from that."

Crucial for all these people being able to return is ensuring the space is level 2-ready.

Meredith Walshe is the co-founder of The Settlement where roughly 130 people used the spaces in either Petone or Porirua prior to the lockdown.

"We're implementing new digital signing in, on iPad with contact tracing, screening," she said, "[and] we're not taking any external meeting bookings for now.

"[We're] taking it really seriously, and we've re-organised the whole space, gone round with my tape measure and measured, and also just how you walk through the space."

But there are also those who will remain uncomfortable about returning at all, which is the gap the hotel chains Rydges and QT are hoping to fill.

They are offering a 'Working from Hotel' deal, where you pay for a day in a hotel room, complete with ensuite, and complimentary hot beverages.

"It's really aimed at individuals who need a quiet space, or perhaps their office doesn't have suitable social distancing," she said.

"So the whole concept is based around the individual who still needs to work and be productive, but for whatever reason, their home environment isn't suitable."

Many will deem level 2 the right time to return to the office, but as pandemic-stemming measures continue, it won't be the office as we know it.