Wellington's turd taxis may be off the city's streets in two weeks, as progress on repairs to a collapsed pipe have surged ahead. 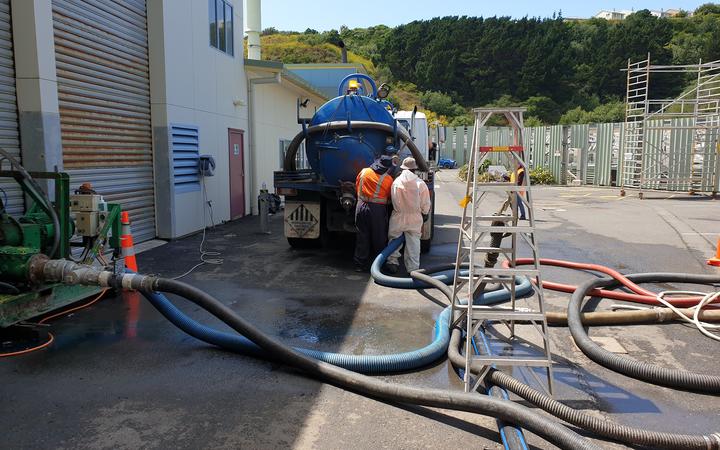 Over the weekend, Wellington Water contractors winched a high-strength polyester liner through the first of two 1.8 kilometre-long sludge pipelines beneath Mt Albert.

Once deemed safe to use, the pipes will carry sludge from the Moa Point treatment plant to the Southern Landfill.

The existing pipes in the tunnel failed in mid-January, which forced trucks or 'turd taxis' to take their place.

Since January, they have been working around the clock to carry sludge over ground at a cost to ratepayers of between $200,000 and $650,000 each week.

Wellington Water's major projects manager, Stephen Wright, said there was a lot more work to do - but the installation was a huge milestone.

The liner must now be tested to make sure it can withstand the volume of sludge from the treatment plant - about a million litres per day.

"Once we've connected the liner to the existing pipeline, we will thoroughly test it and the new pipework."

Contractors will re-connect the repaired pipe to the network at each end, then carry out a thorough testing programme, expected to take about two weeks.

"If we see the results we're looking for, we'll be able to re-commission the pumps at Moa Point and put the first pipeline into full operation while we move on to the second pipeline," Wright said.

"The good news is that having just the first pipeline operational will enable us to stop the trucking of sludge."

The liner for the second pipeline has been made and will soon be on its way to New Zealand from Germany. The technicians, who spent two weeks in quarantine in Auckland before coming to Wellington, will remain in New Zealand until that liner arrives and is installed.

The operation was led by the Germany-based team that manufactured the high-tech liner, and were given special permission by the Government to enter the country.

Wellington Water spokesman Alex van Paassen said the pipes are just 150 millimetres in diameter, so the mission was a long and careful one, taking more than nine hours.

He said a protective sleeve was pulled through first to protect the liner from tearing.

A four-tonne capacity winch, normally used for drawing power cables between pylons, was set up at one end, while at the other, the liner unspooled from giant drums set out in a tennis court across a road.

Once the liner was pulled through it needed to be inflated to fill the pipe.

Wellington mayor Andy Foster, who visited the site on Monday, said he was "looking forward to it being operational".

The council announced last month it would borrow up to $16 million to fund repairs to the burst Mount Albert pipes.

The bulk of this was to cover the trucking of the sludge - between $8.7m and $11.1m. The repairs themselves were forecast at between $4m and $5m.

Foster was hopeful the testing would be completed in seven to 10 days, "and then we can get the turd taxis off the road".

He said the shift to level 2 would help with progress.

"Working under Covid protocols does slow some things down because there are various safety protocols that need to be observed, so it doesn't speed things up."

Wellington city councillor Sean Rush, who holds the three waters (drinking, storm and waste) portfolio, thanked residents "who have put up with noise and odour during work on the Mt Albert Tunnel".