Pilots made redundant in the wake of the Covid-19 outbreak say the government needs to consider tax relief for many like them who cannot access the wage subsidy nor the benefit, in a market where there's fewer jobs and higher unemployment. 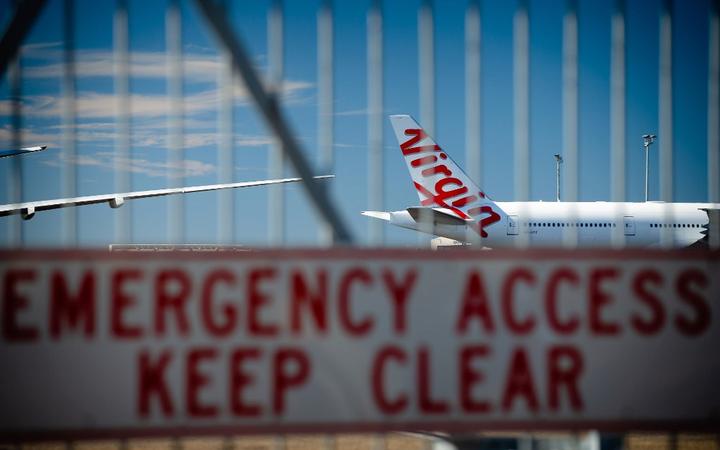 Virgin Australia closed its NZ bases at thestart of April wiping out around 600 jobs. Photo: AFP

When former pilot Kit Alexander's daughter bought him her pocket money so he could buy a coffee during his pizza delivery shift, he admits things got a bit emotional.

But Alexander said he felt fortunate compared to most people, given what was happening with Covid-19.

He was made redundant by Virgin Australia, which closed its New Zealand bases at the start of April, wiping out around 600 jobs. He had been with the company for 12 years.

"I've applied for a lot of different jobs but there's not a lot out there. I'm grateful to have a part-time job stacking shelves at New World and delivering food for Pizza Hut and KFC.

"The difficult thing for a lot of people is there is no future for them in New Zealand for a long time and employers look at you as not having transferable skills."

He suspects the delivery work will come to a halt soon, as more normal life returns.

Alexander has a mortgage and bills to pay but keeps repeating how "lucky" he is compared to others though.

"I am very lucky to get that redundancy. That's keeping us afloat at the moment."

However, he is worried about other colleagues who have just bought homes and tens of thousands of people who are going to lose their jobs in the coming months.

Like more than 5000 others he has signed a petition asking the government to stop taxing redundancy payments during the pandemic. The rate can be as high as 33 percent. The petition is due to be presented to Parliament this week.

Alexander said he and many people made redundant were "falling into a gap" because they couldn't get the wage subsidy nor a benefit for some time.

"Tax and redundancy law needs to change because it doesn't take into account a situation like this pandemic. It feels like the government is helping lots of people, which is really great, but many people are falling through. We've all spent years paying our taxes. And we're just the first wave of this … it's going to be a much greater problem in the future."

Given the circumstances, he'd also like to see the removal of the factors which can delay payment of a benefit like holiday pay, sick pay, long service leave and pay in lieu of notice.

'The timing couldn't be worse'

Fellow former Virgin pilot Peter Briant agreed. He said giving people tax relief around their redundancy payments would give them a greater chance of surviving financially.

He and his wife, Rebecca, and their two children, are in a rented property at the moment as they had not long started building a home.

"The timing couldn't be worse," he says.

However, he and Rebecca still consider themselves luckier than most but they are weighing up what to do. The house may have to be sold and a move back to Australia is being discussed.

They don't want to go though. They moved to New Zealand with their two children about four years ago and they love it here. It is home.

Briant, who also has a business degree, has found a job sorting parcels with NZ Post. He's very grateful but the money is not enough to pay the rent.

"It's hard to convince people you have transferable skills. The whole legislation around tax and redundancy needs to change so the money can last longer."

His wife said it didn't matter which industry one was in at the moment, being made redundant is like being a "forgotten casualty".

Last week 300 Air New Zealand pilots lost their jobs under an agreement reached on the future of 1200 jet pilots employed by the airline.