There are no new cases of Covid-19 confirmed in New Zealand today, but one probable case has been reclassified as confirmed.

Missed the briefing? Watch it back here:

Director-General of Health Dr Ashley Bloomfield said that meant New Zealand's total of confirmed and probable cases remained the same at 1487. The total number of confirmed cases is 1137.

Dr Bloomfield said there had been no additional deaths, leaving New Zealand's total at 20.

The last time there was 0 new cases was on 16 March.

There are seven cases in hospital, and none are intensive care.

There number of clusters in NZ remains at 16, three of them have now been closed as there have been no cases of community transmission in the past few days.

"Clearly these are encouraging figures today, but it is just one moment in time. The real test is later this week when we factor in the incubation period for the virus and the time it takes for people to display symptoms which is generally five to six days after exposure," Dr Bloomfield said.

"That's when we will have an indication if there are any new cases coming through that might be emerging in the community as a result of our shift from level 4 to level 3.

"We cannot afford to squander all the hard work and effort of the past weeks. We did see at the weekend that it can be easy to start slackening off and we need to maintain discipline and keep pushing on and sustain the advantage that we have fought so hard for." 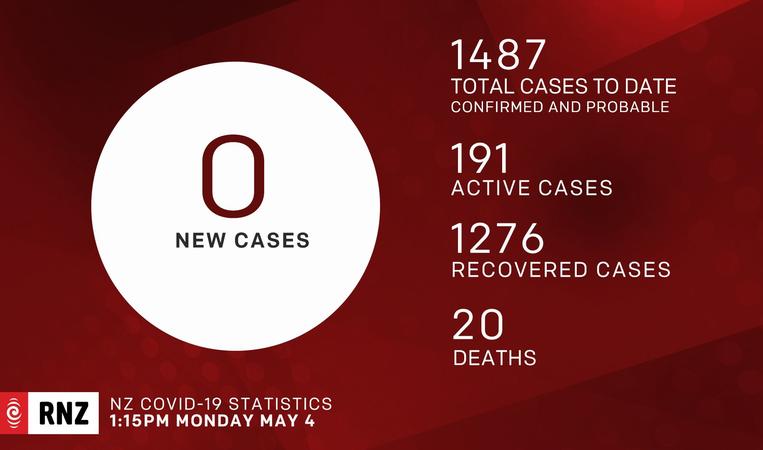 Covid update for 4 May Photo: RNZ

Dr Bloomfield said staff and students at Marist College in Auckland would be able to undergo free testing in a joint initiative between the Public Health Unit, the DHB, and the school.

"While only half of the 94 cases at Marist came from within the school ... it's important for the rest of the school to be tested," he said.

Dr Bloomfield said 1.35 million flu vaccines had been distributed to general practices, pharmacies and workplaces so far this year - a record year for NZ.

"I can reassure those of us that are relatively healthy that there is a very low level of influenza circulating in our community," he said.

"Over 451,000 people over 65 have been vaccinated already this year, exceeding the total number vaccinated in the whole campaign last year.

"More Māori over 65 have been vaccinated in the past five weeks than the entire year of vaccination last year."

About 700,000 vaccines had been registered as administered by 30 April, Dr Bloomfield said. He said some may have been administered but not yet recorded.

"Any GP or pharmacy that has run out of stock at this point and still has at-risk people requiring vaccination should get in touch with their local immunisation coordinator who've been coordinating the process of redistribution and/or prioritising access to the next shipment of vaccines when it arrives."

The next vaccine shipments would be arriving this week and next week, he said.

Dr Bloomfield was also asked if he had been contacted to work out how a trans-Tasman bubble would work.

"We are working very closely with our Australian counterparts on what those key public health pillars would need to be around how we are testing for and identifying, isolating cases and contacts and also our position around contact tracing and our ability to exchange information smoothly to ensure any contacts or potential contacts could be followed up if they had travelled in either direction," he said. 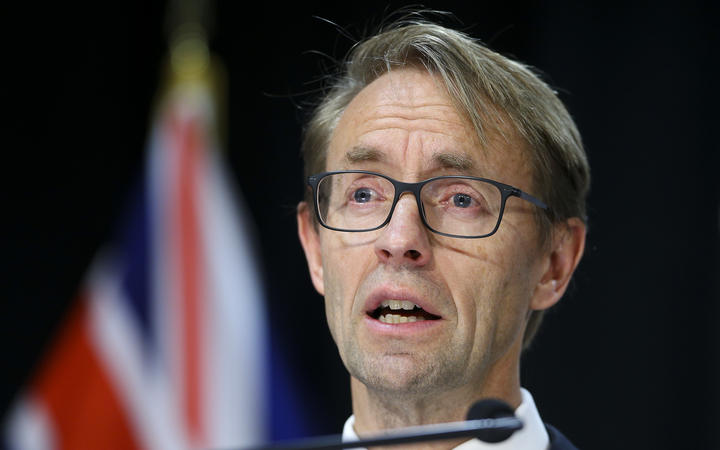 Despite having no new cases today, Dr Bloomfield warned New Zealanders needed to continue their vigilance.

He said the country needed to stay in level 3 for the full two weeks to be sure there was no undetected community transmission.

"We've had a week of testing out in the community to identify - so, testing asymptomatic people in a range of settings - and that continues this week," he said.

"Reflecting on the incubation period of this virus ... it's really later this week that we will be confident if we are or are not seeing new cases popping up in the community. So that's why it's very important we maintain the current posture."

He said New Zealanders would not know until later this week if the move to level 3 had led to increased infection.

The Ministry of Health was still finalising its advice to Cabinet on progress towards a contact tracing app, but it would not be a requirement for moving into level 2, Dr Bloomfield said.

Earlier today, Prime Minister Jacinda Ardern cautioned against "acting like we've won already" against Covid-19. She told Morning Report level 3 was like a waiting room where after a cycle of transmission the government can use the data to assess whether there are unexplained cases that are cause for concern.