Auckland mayor Phil Goff is expecting the demand for free food parcels to grow as the wage subsidy finishes and more people lose their jobs. 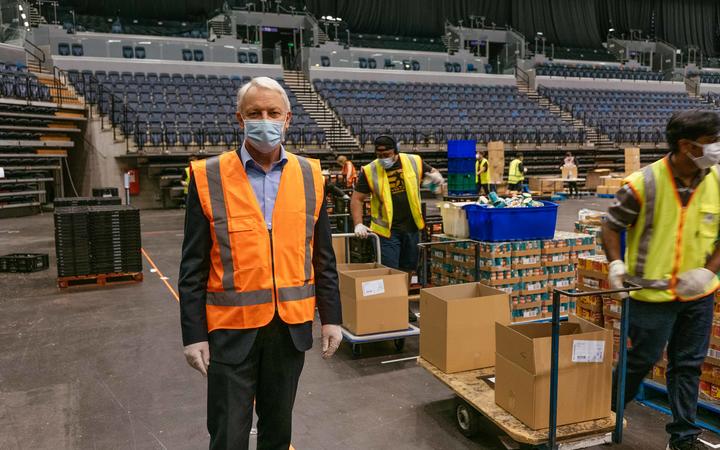 Auckland Emergency Management has sent out 16,000 food parcels to 11,000 households so far during the pandemic from its dispatch centre at Spark Arena, group controller Mace Ward said.

This is in addition to non-governmental organisations also distributing food in the city, such as the City Mission.

The food packages are usually two boxes of non-perishable foods and some other products to meet dietary needs.

Goff said he expected this demand to rise as the economic reality bites harder.

"My guess is there's going to be a time delay. Certainly as the wage subsidy runs out that may mean that a number of those people being laid off," Goff said in an emergency Auckland Council meeting this morning.

He said the situation in the United States of the most severe economic contraction since the global financial crisis was likely to be somewhat similar here once economic data is released.

"There's no reason to suspect we'll be spared a lot of the effect of that here.

"I think the need to provide that urgent assistance by way of food parcels will be ongoing, even beyond the reduction to level 2 . That may be, however, not through a distribution centre as we're doing now but through additional asistance through the food banks."

Four thousand supply packs of non-food essentials have also been sent out.

Councillor Chris Darby said the demand for food parcels handed out by the North Shore Sikh Society over the weekend was overwhelming.

"[It] was supposed to be for an hour, and the queue of cars was across the hill and out of sight for an hour and a half.

"I was quite surprised to see the demand for a modest food parcel. It sort of says to me that the enormity of this problem is only going to grow as the wage subsidy runs out and the redundancy notices roll in."