Residents in the Auckland suburb of Remuera say they're being plagued by dead eels, sewage floating down streams and smells so pungent it makes them gag. 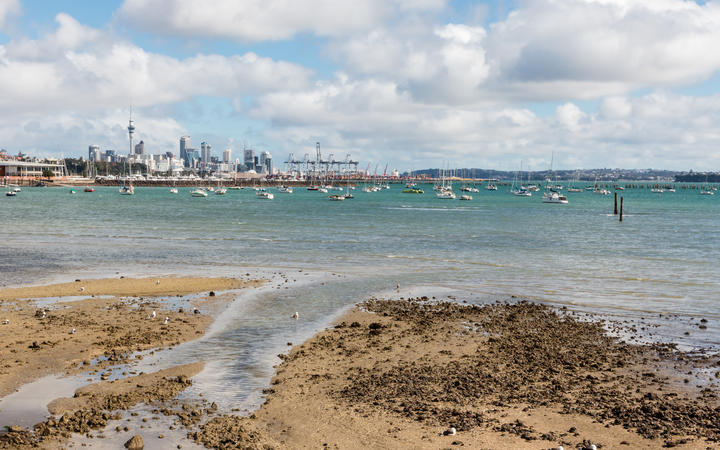 The waterways around Hobson Bay have become a hotspot for faecal contamination, and it could be years before the water runs completely clear again.

According to the Ministry for the Environment, a waterway becomes a health risk if it has any more than 280 units of E. coli per half a cup of water.

This month half a cup of water scooped from the stream through Thomas Bloodworth Park in Remuera was a whopping 700 times over that threshold with 200,000 units of E. coli.

Charlotte Winstone leads a walking school bus route along the adjacent Shore Road, and saw the effects worsening in weeks of dry weather leading up to the lockdown.

"We were literally all holding our noses as we walked past and it smelt really strongly of sewage. So that was a pretty horrible experience," she said.

"One of our walking school busses saw a dead eel, and it was really sad for them to see that was the effect of the polluted water."

Auckland Council has tacked up signs to warn people in Thomas Bloodworth Park to steer clear of the contaminated water, and it's done the same at connected waterways in six other nearby parks and around Hobson Bay, a short distance downstream.

Recreationally, Remuera resident Margot Nicholson said the contamination had put a stop to a lot of what the area was enjoyed for.

"We have local people who catch fish and we kayak, there are paddleboarders, jetskiing ... but it's also a significant ecological area with really beautiful bird life, marine life," she said.

One was a "dry weather"' network fault that should be fixed within months, but the other was overflow problems in wastewater pipes around the Eastern Bays, triggered by heavy rain, which would take years of work and investment to fix.

"It's a complex issue. Residents are quite right - it's not an acceptable level [of E. coli], particularly the dry weather contamination. This is something we haven't been aware of the scale of until quite recently, so there'll certainly be no hold up from our perspective in terms of getting on and addressing that issue. But we understand it's frustrating for residenys, particularly in terms of those longer term solutions like the wet weather overflow," he said.

Vigar said Healthy Waters was putting together a plan to fix those wet weather issues and it would be handed to Auckland Council to be included in its next long-term plan.

But Watercare said some of the work would have to wait until the council finished building a one-point-two billion dollar wastewater interceptor tunnel to stop pollution in waterways across the city.

"We must complete the Central Interceptor first, to free up capacity in the network. The central interceptor will be completed in 2025."

That's too long in the eyes of residents like Margot Nicholson, whose Remuera environmental community group Hapua Thrive has started putting the pressure on Healthy Waters and Watercare, to provide more detail about their proposed solution.

Auckland councillor Desley Simpson agreed it should be prioritised against all the council's other projects.

"For so long it's been put off. It's not a priority. Something else is always more important. But actually, I think it's come to a point where there can be nothing more important because this is so bad. The data is so much higher than swimming guidelines," she said.

In the meantime, Remuera residents who notice dead eels or raw sewerage on their daily bubble walk are being urged to report it to the council's pollution hotline.