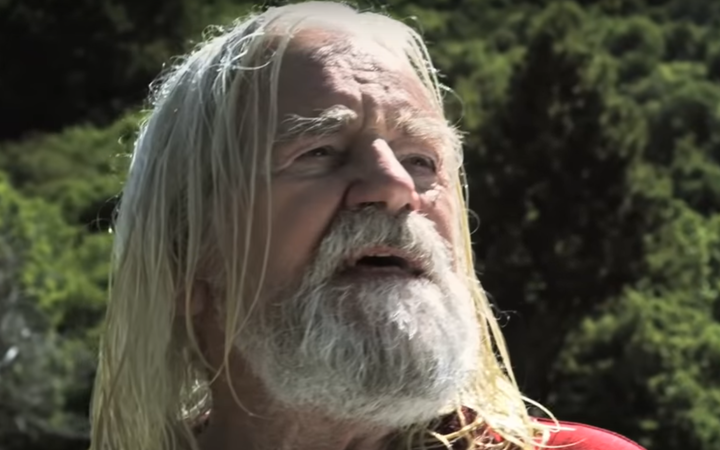 A screenshot of Bruce Allpress from the 2010 short film Frosty Man and the BMX Kid. Photo: Screenshot

His family say he died peacefully, surrounded by his five children, on Thursday.

Allpress was involved in New Zealand's film and television industry for more than 60 years.

His family say his mother, who took him on outings to amateur theatre productions while growing up in Dunedin, inspired his love for the performing arts.

Allpress first appeared on stage in the 1960s, when he landed a role in a Vaudeville act called The Cheeseman Singer Series. He later appeared in a number of television series including Hunter's Gold, The Billy T. James Show, Close to Home, Jocko and Mortimer's Patch.

He also starred in New Zealand films Came a Hot Friday, The Scarecrow, a small role in The Piano, Lord of the Rings, Frosty Man and the BMX Kid, as well as a number of international films.

Allpress was also involved in theatre and worked as a director and producer.

His family say later in life he became a fixture in Auckland's Albany community, where he opened the Albany Hill Cottage Antique shop.

His son, Michael Allpress, who runs Allpress Espresso, said his father was an early investor in the company.

"Dad lived an extremely full life ... He was very accepting of the vast diversity that humanity presents and very much an independent thinker. He was a valuable and wise contributor over the years at Allpress Coffee. He will be missed dearly."

Actor Peter Elliot said he enjoyed his interactions with Allpress greatly, and his humour and "wicked pisstakes" were the stuff of legend.

"I had the greatest pleasure working with him and picking his brains in the '80's and '90's, both in television and theatrical circles.

"On rare occasions I would pop into his antique store for a brief insult and comedic quip or two. And I have always enjoyed his appearances on our screens. Although he will be sadly missed, he will also be long remembered. An icon of the era."

His death was not Covid-19 related.