A police officer who raped his colleague in Northland last year can now be named as Jamie Foster. 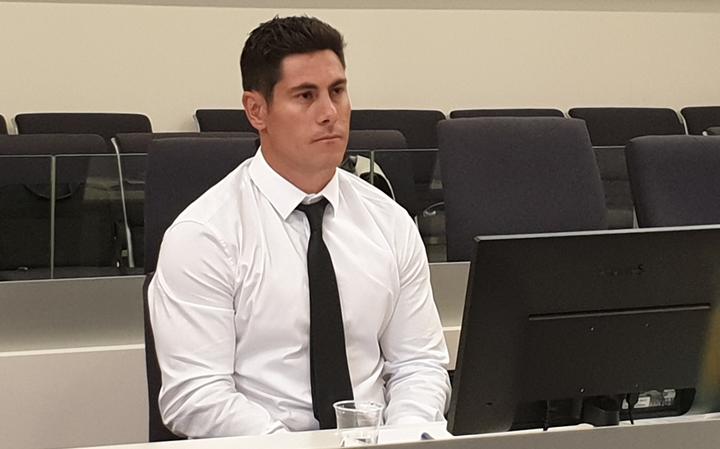 Jamie Foster was found guilty of raping his colleague after a two-week trial in the Auckland District Court. Photo: RNZ/Anneke Smith

Foster groped and later raped his female colleague in a Kerikeri motel they had been put up in during Waitangi commemorations last year.

The North Shore constable was found guilty of indecent assault and sexual violation after a two-week trial in the Auckland District Court last month.

On hearing the guilty verdicts, the 29-year-old lost his composure; swearing and yelling it wasn't fair in the dock.

Foster was refused continued name suppression ahead of his trial but kept his identity secret on appeal.

This morning his lawyer Paul Borich QC confirmed the appeal to the High Court had been abandoned.

At his trial, Foster argued any sexual activity with the woman was consensual and part of a prearranged hook up.

The jury watched CCTV footage of the pair socialising in the hours leading up to the assaults and of Foster sneaking across the courtyard and letting himself into the woman's room when everyone had gone to bed.

It also heard a brief recording the woman made after the rape, in which you can hear her say to the man: "I denied you earlier and I've woken up to you f****** me".

The woman gave evidence that was cross-examined and then re-examined for several days during the man's trial.

She said she woke up in pain to being raped that night, and repeatedly denied suggestions she had invented the assault because she felt guilty about cheating on her partner.

The woman cried as she told the jury she knew the medical examination would follow a formal complaint, but did it anyway because what happened to her wasn't right.

"You tell them what happened and essentially then you just get treated like a specimen or a piece of meat.

"And then have to just strip off and be swabbed for them to gather evidence and then put on foreign clothes."

It was Paul Borich QC's submission the pair's interactions were a precursor for what was to come and showed they were plainly comfortable in each other's company.

However, Crown prosecutor Fiona Culliney told the jury the man had "helped himself" to the woman that night.

"Put simply, he helped himself to the sleeping complainant. He took the risks given his own intoxication and sense of entitlement."

Superintendent Naila Hassan later condemned the officers' antics that night as unacceptable, disappointing and out of line with the values of police.

Four staff were investigated for breaching the police code of conduct but only one of them is no longer working for the New Zealand Police.