She's making grown men cry every day but a Covid-19 tester says the long shifts in sweltering PPE are making a difference. 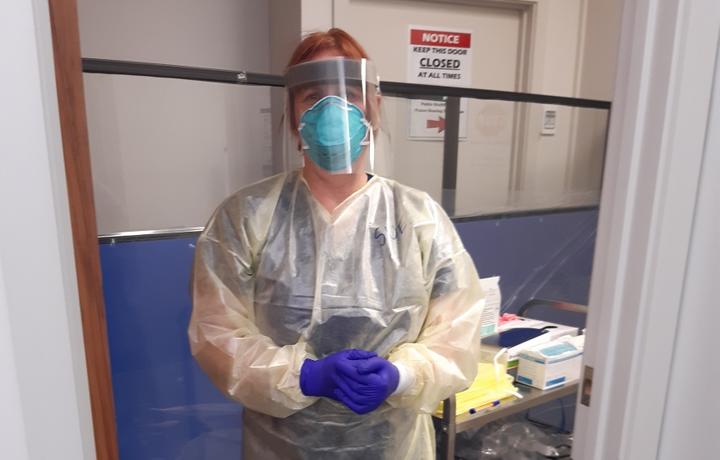 Sue Wilson, a nurse at the Invercargill testing centre. Photo: Supplied to RNZ

DHBs say they've been busy testing a lot more people with very minor Covid-19 symptoms since the prime minister put the call out last week to get tested even if you have a runny nose.

One of those doing the mahi on the ground is nurse Sue Wilson, who is at the Invercargill testing centre.

Her team was working nine-hour shifts in head-to-toe personal protective equipment - recognisable only by the first names names scrawled on the front of their gowns.

It was daunting for people arriving to be tested at the converted Wellsouth offices, with plastic covering the walls and floors, and minimal furniture.

And then there was the test.

"We're taking a long thin swab and we're inserting it deep into the back of their throat and nostrils and we've got to be at each site for 15 seconds," she said.

"It was not always easy and could make people cough, sneeze or tear up," she said.

"I told a gentleman the other day, 'in this job I get to make grown men cry and I haven't even met them before now'."

Sue said her team had great camaraderie and did their best to put people at ease.

That wasn't easy when they had to stay at a distance with most of their face covered.

"Our eyes and our voices are really the only way we have to communicate. We get good at smiling with our eyes ... just to make them feel welcome and that human touch," she said.

The odd person had vomited or fainted but most took the test on the chin and said thanks afterwards, she said.

A nine-hour day in full protective gear was intense and tiring.

"Your nose runs, your face gets quite itchy, you want to scratch it by you can't. Sometimes your goggles fog up and underneath your gown you can often overheat and sweat because the material isn't breathable," she said.

They had to clean the room between every test, and when they removed their gear at the end of a stint there was a tricky process to avoid contaminating themselves, she said.

Her team could test up to 12 people an hour.

"Most people recognise the importance of it ... that it's not just about themselves, it's about other people in their bubble or the community, protecting them."