A group of 16 New Zealanders stranded on a cruise ship in Uruguay have now boarded an evacuation flight to Australia. 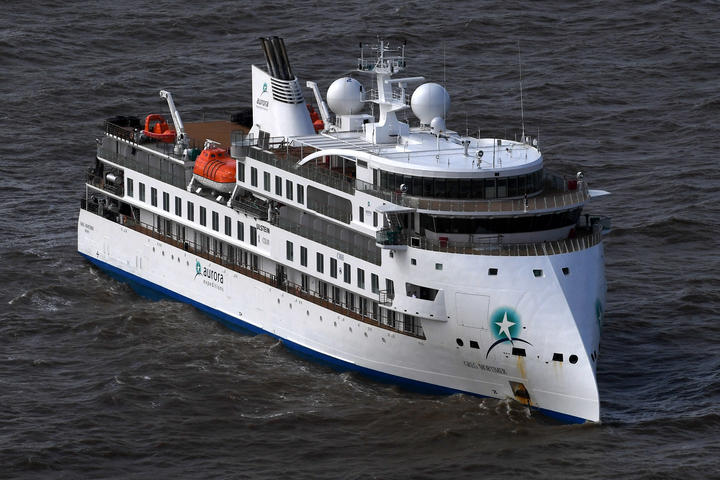 The Greg Mortimer off the port of Montevideo on 7 April 2020. Photo: Pablo Porciuncula / AFP

More than half of the 217 passengers on board the Greg Mortimer have tested positive for Covid-19.

The cruise company, Aurora Expeditions, has been working with authorities in Uruguay to get people off the ship.

In a statement issued this evening, Foreign Minister Winston Peters said a medivac charter flight carrying New Zealand and Australian passengers from the Greg Mortimer cruise ship had taken off from the Uruguay capital Montevideo.

The flight is scheduled to land in Melbourne tomorrow morning.

A government chartered plane will then fly 13 New Zealanders to Auckland where they will go into quaratine.

Three New Zealanders based in Australia will remain there.

Earlier, Aurora Expeditions said the plane would be divided into risk zones, with passengers seated according to their test results and the level of care required.

The cost of the flight is being covered by Aurora Expeditions' insurance, so there is no cost to passengers.

The Ministry of Foreign Affairs said 13 of the 16 New Zealanders will be immediately transferred to a flight chartered by the New Zealand Government back to Auckland.

The ministry said because a large proportion of passengers on the Greg Mortimer had tested positive for Covid-19, all passengers were being treated as though they had the virus as a precautionary measure.

In late March there were 372 New Zealanders still on board 30 cruise ships throughout the world, but early this week that number fell to 58, the Ministry of Foreign Affairs and Trade said.

Among those repatriated were 15 New Zealanders who were on the MS Zaandam cruise ship who were able to travel home safely after it was allowed to dock in Florida.

The ship's authorities had reported an outbreak of more than 100 people suffering a flu-like illness, and at least four deaths onboard.

Since mid-March it was refused entry to a series of Latin American ports along its route, and initially the US.