Campers have described a makeshift campground at a Whakatāne shopping centre as a breach of human rights, while the mall's owner says it was not consulted about the designation. 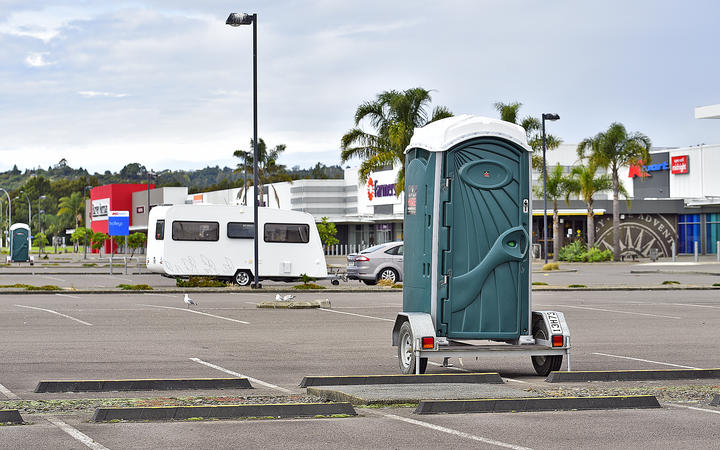 Portaloos are the only facilities available for freedom campers staying in The Hub's car park. Photo: Troy Baker / The Beacon / LDR

The Whakatāne District Council has designated the car park at The Hub on the outskirts of Whakatāne as a place where freedom campers in self-contained vehicles can park up and stay until the Covid-19 lockdown is over.

The Hub's owner, Maat Group, said it wasn't asked about the decision before it was made. The decision has since been criticised by campers and others in the community.

The council is now looking at alternative options as very few people have been staying at the car park.

Jamie and Tiff Turner, a couple with three young children who freedom-camp as a way of life, said the conditions they were expected to stay in were a breach of their human rights and they had since moved on to the Ōhope Beach Top 10 Holiday Park.

Mrs Turner said the couple were planning to ride out the lockdown at a freedom camping site which had access to running water and a place to empty their waste tanks, as staying at a holiday park was out of their budget.

"We felt that was a safe place to isolate as we didn't have to travel to empty our waste tanks and would only need to travel to go to the supermarket just like everyone else," she said.

"When I was told by council we would have to self-isolate in a car park with no facilities, I was horrified."

As the car park has no electricity, no running water, and nowhere to empty the family's waste tanks, the Turners would have to leave it every three days at the least, rather than the once a week they were hoping for at the other site.

"I just didn't feel safe doing that with my children," Mrs Turner said.

"Being forced to stay there in those conditions was a violation of our human rights. We had no access to sanitation."

The family spent one night at the car park before moving on to the Top 10 park.

While staying at the holiday park stretches the family's budget, Mrs Turner said it was the best choice for their family and they were applying for government subsidies.

Their three young children now have grass to play on, rather than concrete, and are not being forced to sleep under bright car park lights which stay on all night.

They are also enjoying the "luxury" of electricity and hot running water in their camper van.

"It goes against Kiwi culture forcing people to live like that," Mrs Turner said.

"Police were patrolling the car park to ensure we were all maintaining social distance and they have been through the holiday park while we have been here. There is no difference other than this is a healthier, safer environment for our children.

"We're really grateful to Mark Inman, the holiday park manager, for fighting to have the park remain open."

Another camper, who didn't want to be named, arrived at the holiday park this morning after police told him to leave The Hub.

Like the Turners, he travels around New Zealand, and doesn't have a permanent home.

"The police told me to leave the car park because they said it would be better for me here," he said.

"The car park was alright, I spent four nights there, but here I have all the bare essentials such as electricity, running water and somewhere to empty my waste tank."

A council spokesperson said the council had been assisting government agencies in implementing the strict conditions that now applied during New Zealand's Alert Level 4, which aims to prevent further spread of Covid-19.

"As such, the council and police worked together late last week to establish overnight camping at The Hub," the spokesperson said.

"This was intended for those self-contained motor vehicles that were unable to return home and/or did not have the means to afford the tariffs for privately-operated campgrounds once the council's overnight camping sites were directed to close.

"Council was initially advised that there were up to 50 motor camping vehicles in the area that may require a site.

"Police advice was that it would be safer and more efficient to manage the unknown number of people and vehicles in one central location that allowed for safe distancing."

The spokesperson said it had now become clear that there were "very few" people who needed to stay at The Hub as there had been fewer than half a dozen vehicles there overnight. For this reason, the council was now working with welfare agencies on options to house these people elsewhere.

"The council acknowledges that the situation has been challenging for those in this position," the spokesperson said.

"This issue is not specific to the Whakatāne district. It's a dynamic environment and this particular matter has been challenging to navigate on a social level."

The council did not respond to a question about whether it consulted with The Hub's owner before placing freedom campers in its car park.

The Ministry of Business, Innovation and Employment has asked anyone requiring temporary housing to register by calling 0508 754 163.