Northlanders unable to attend council meetings due to Covid-19 can be assured democracy is still alive and well, according to Northland Regional Council chief executive Malcolm Nicolson. 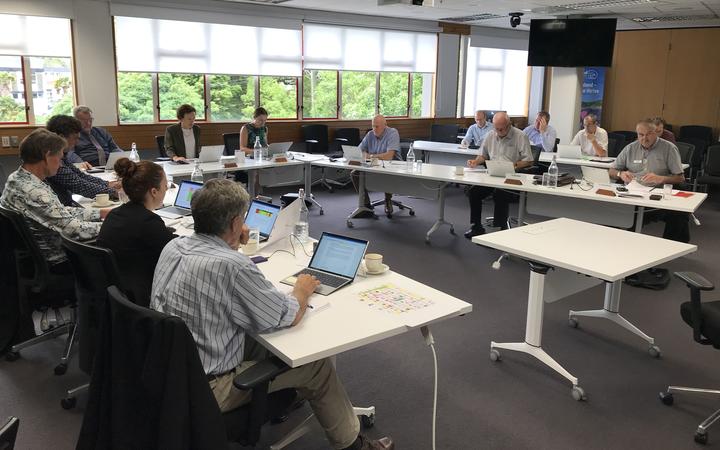 The Northland Regional Council - pictured before the Covid-19 physical distancing requirements - is about to meet remotely for the first time. Photo: Susan Botting

"The new way in which we're operating through this time is even more reason to make sure [democracy] is held to the highest level of transparency," Mr Nicolson said.

The regional council's next meeting is on 29 April. Councillors as much as 220km apart will gather remotely over the internet to conduct the meeting - a council first.

The council's nine elected representatives helm the management of a $66.2 million budget and are paid $707,450 a year to do so. They serve a population of almost 180,000 people across 12,500 square kilometres.

Members of the public will not be able to participate by "attending" the 29 April meeting.

The council did not have the ability to live-stream its meetings, Mr Nicolson said.

Council meetings are for the first time legally able to take place online, following an urgent legislative change last week in the wake of tough new restrictions on gatherings.

Prior to the change, it was illegal to hold such meetings. All of New Zealand's 78 councils had to have a quorum of elected representatives physically present for full council meetings.

Councils were now required to make at least an executive summary of their meetings available to the public, very quickly after the meetings. This was one way democracy would still be served, Mr Nicolson said.

This requirement would come ahead of the usual meeting minutes, unless those could be made available immediately.

The new legislation enabling online meetings still required a normal quorum for council decisions, just not a physical one.

The Northland Regional Council's quorum - the minimum number of people that must be present for a decision to be made - is five of its nine councillors.

Two other major statutory meetings are also scheduled for April.

Northland's heavyweight regional transport committee is to meet remotely on 8 April. It will include at least one councillor from all four councils in the region, plus the New Zealand Transport Agency. Other regular participants include New Zealand Police, the Northland Road Safety Forum and the Ministry of Transport.

The Oneroa-a-Tōhē Board is due to meet on 17 April. It is tasked with managing Ninety Mile Beach and is jointly administered by Northland Regional Council and Far North District Council, in partnership with Te Hiku o Te Ika Iwi. The board is made up of Te Rūnanga o Te Rarawa, Te Manawa O Ngāti Kuri Trust, Te Rūnanga Nui o Te Aupōuri Trust and Te Rūnanga o Ngāi Takoto, alongside the two councils.

The Northland Regional Council also held an extraordinary meeting on 25 March to boost its pandemic preparedness.

Emergency delegation powers were put in place, partly to provide succession and a structure to run the council should its members become ill with Covid-19.

These would allow a quorum of two people, rather than the usual five, if elected representatives became sick. The ability to make emergency decisions would be delegated to the chairperson, deputy chairperson and chief executive.

The meeting also set up a process for managing day-to-day operations if the chief executive or managers became sick.