New Zealanders being repatriated from a cruise ship off Western Australia were escorted by police to their flight. 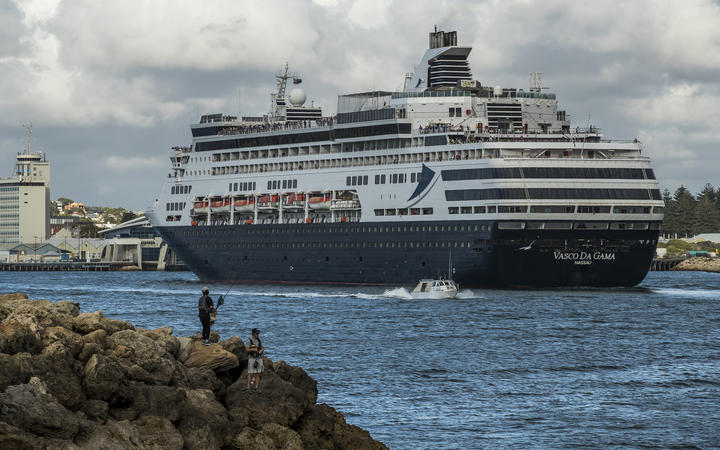 New Zealanders aboard the Vasco da Gama were able to leave the cancelled cruise at Fremantle in Western Australia. Photo: TONY ASHBY / AFP

Yesterday, after two weeks on board the cruise ship without disembarking once, the 108 New Zealanders were finally allowed on solid ground in Fremantle in Western Australia overnight.

They are expected to arrive in Auckland this afternoon.

Buses took them directly to the airport, and an Air New Zealand plane flew out of Perth bound for Auckland.

The cruise left six weeks ago for a round-the-world trip but was cancelled after a passenger was suspected of having the Covid-19 coronavirus.

The person later tested negative, but the cruise remained cancelled and no one had been allowed to disembark until last night.

The Air New Zealand flight is expected to arrive in Auckland about 2pm.

The son of an elderly couple on board, Robbie Lane, said his parents were anxious to get home.

Passengers had applauded news they would be flying back to New Zealand, Lane said.

"My mother was able to say at lunchtime that when that information was passed on the New Zealanders ... gave a round of applause, just I guess that sense of relief."

His parents expected to be placed in quarantine somewhere in Auckland for 14 days.

Lane is now trying to organise a flight for them once the 14 days are over, so they can finally return home to Christchurch.

No Covid-19 coronavirus cases occurred on the ship and social distancing was observed onboard.

About 200 of the 800 Australians who were onboard the Vasco da Gama are from Western Australia. The other 600 will be placed in quarantine on Rottnest Island and in hotels.

Earlier this week, the Vasco da Gama was involved in a dramatic passenger swap off the coast of Thailand.

Its Europe-bound passengers used lifeboats to get on board another ship, the Columbus, and 108 New Zealanders and dozens of Australians got onto the Vasco da Gama.