Two German tourists in New Zealand are waiting for a flight confirmation so they can get home. 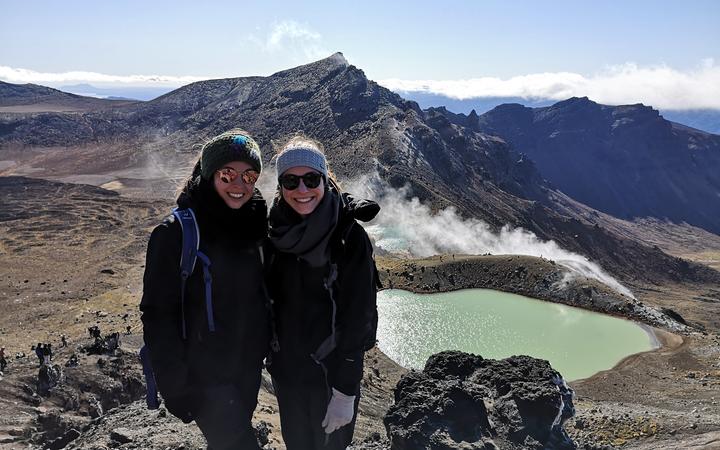 Susi Vormvald and Alina Stamm on the Tongariro Crossing, prior to the lockdown. Photo: Supplied/Susi Vormvald

The German government announced it will evacuate nearly 80,000 of its citizens stranded abroad and about 12,000 of them are in New Zealand.

Susi Vormwald and her friend Alina Stamm have been in New Zealand for two weeks, for what was supposed to be an eight-week tour of the country in a campervan.

Vormwald said they presumed they would not be on the first flight out of New Zealand because they would have been informed by now.

"I get text messages from my parents and my friends every day and all day and they're all asking when are we returning home but we don't know and they don't know and we all have to wait."

Vormald said Germany was locked down two weeks ago and like in New Zealand everybody is now isolated at home and cannot go out.

Stamm said they are currently isolating themselves in a campervan on a property that is about 40 minutes away from Auckland Airport.

With no plans for mercy flights to bring New Zealanders home, a Palmerston North mother has had to make the tough decision to keep her teenage daughter in Northern Italy.

Kerri Mills's daughter Charlotte is just weeks shy of her 18th birthday and on a student exchange.

Mills said the only port out of Italy is Rome and that would have meant her daughter had to travel independently because her host family is unable to travel with her to Rome to get her out.

"The programme advised us to make the decision to actually leave her there because she's actually safer."

Mills said the New Zealand government has said that if people did not return now they would potentially lose their support.

Mills said she has been writing to New Zealand ministers and has been in touch with the Italian embassy and the New Zealand embassy in Italy saying that she needs her daughter to be on a mercy flight if they offer them.

"If mercy flights were on the table, yeah me and my family we want her on them."

She said initially agencies provided the standard advice saying "get her out".

"But when you can actually sit down and talk to a real person they say actually you're making the right decision as a parent to leave her there."