The Ministry of Health has surveyed intensive care units and says it can more than triple their capacity immediately. 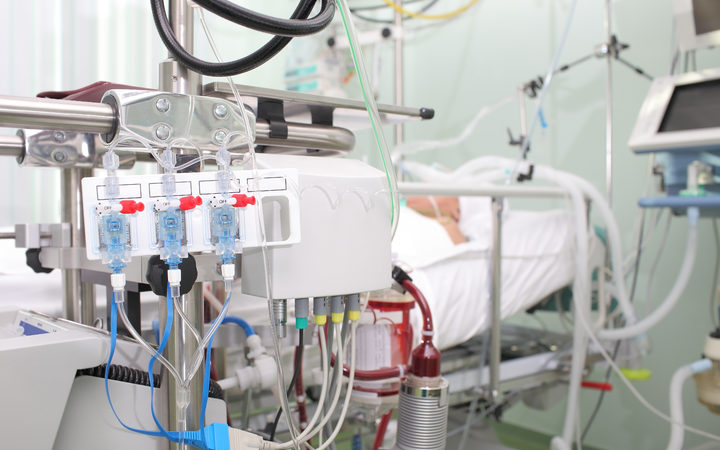 However, the units themselves report widespread understaffing and workers have spoken of being burnt out.

Several different figures for ventilator numbers have been reported in recent days, ranging from 176 to 221.

Director-General of Health Ashley Bloomfield ordered the survey which the ministry has had since last Friday, and was checking on it with ministers.

"I was encouraged by it because we have around 180 ICU beds as it is, fully staffed, and the ability to, at least with our current ventilator capacity, treble that immediately."

A bottleneck of staffing was being dealt with.

"One of the reasons we want to reduce elective surgery and outpatients is so we can train staff to be able to look after people who are ventilated, and looking at how we can increase our number of ventilators," Dr Bloomfield said.

However, newly collated figures show about 90 percent of the country's intensive care units are short of staff.

Nineteen out of 21 ICUs and anaesthetic services told the Association of Salaried Medical Specialists (ASMS) that they needed more staff, though only 55 percent of them had essential vacancies at the time of the 2019 survey of clinical directors.

"What we found the most concerning is that even in the light of those vacancies, all but two of the services that responded said that they needed significantly more bodies on the ground basically to do the work," said the lead researcher, Dr Charlotte Chambers.

"It's not a great situation to be faced with when we know that things are likely to be getting even more pressured as Covid-19 develops further."

ASMS collated the figures due to the intense interest in intensive care capacity in light of Covid-19.

The comments from ICU doctors to ASMS in 2019 included: "The main concern for me is that we still have a 24-hour 'shift' where we work 8am to 6pm, then cover the unit until the following morning.

"With the increased ICU activity/busyness, this often means you spend 24 hours straight at work, or frequent phone calls and/or attendances in the unit after hours.

"This means that some very tired people are looking after critically ill patients."

Overall, the ICUs reported being 17.5 percent short of staff - they had 258 staff across the 13 DHBs* the survey got responses from, and needed another 45 staff all up.

Dr Chambers said medical specialists provided great care, and people "had faith in them" but doctors were already very tired before Covid-19 hit, and the busy winter season was also approaching.

"I think that's certainly a reality that they're facing... I guess the issue that we have is that they themselves know that it's not always safe to be working crazy hours. Fatigue is a real issue."

More than half described themselves to ASMS as burnt out, and 80 percent said they turned up to work even when sick. This would not be able to carry on under Covid-19, Dr Chambers said.

"I guess we have to be creative. We have to think about different ways in which we could staff core services like the ICU, and make sure that we don't compromise continuity of care. Again, the clinicians know best in this regard," she said.

"I guess the only hope we have is that the district health boards and the service managers around the country will take their advice and put actions into place."

It was a wait-and-see space on that regards the pandemic and how the ministry and Minister of Health were responding, Dr Chambers said.

"It's just about giving them the best working conditions, protecting their health and wellbeing, whilst we put them out to fight this frontline."

Even where a specialist noted to the survey that their ICU was relatively well-staffed, they said it was about to open a new part so "then we shall become understaffed relative to bed numbers".

An approach that relied on recruiting overseas - the hospital doctor workforce is made up of 42 percent of international medical graduates - was not a long-term solution, compared with making working conditions more attractive for local graduates, Dr Chambers said.

* The 13 DHBs response came from included Waikato, Auckland, Hawke's Bay, Bay of Plenty and Lakes; but not other DHBs that do not have their own ICU units, such as Wairarapa, West Coast, and Whanganui.