Doctors have been on the phone to thousands of patients since this morning in a radical move away from face-to-face consultations. 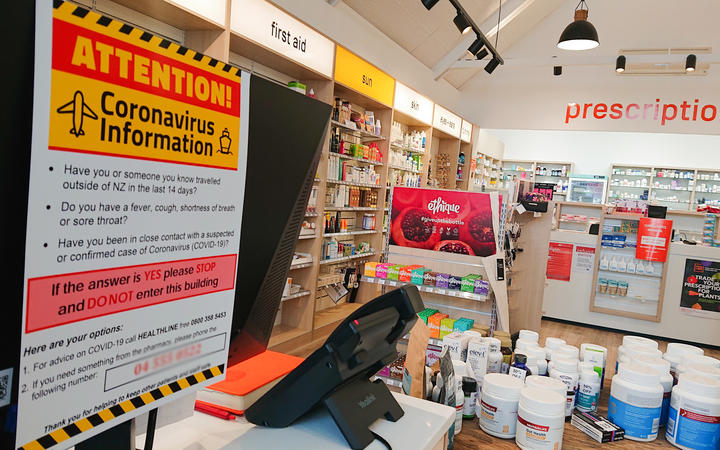 A sign in a pharmacy. Photo: RNZ/ Rob Dixon

One Auckland medical centre has done away with its waiting room altogether to combat Covid-19.

The five GPs at Westmere Medical Centre in central Auckland usually see 60-70 patients between them; today that dropped by 90 percent.

Dr John Cameron said it had been "fascinating" witnessing patients adapt so well.

"We've basically locked the practice down to people wandering in - we don't have a waiting room anymore.

"That must be a first for general practice in Auckland, not to have a waiting room. But it seems to be working really well."

Triaging over the phone was actually saving time, taking about 10 minutes for each patient, compared with a usual 15 face-to-face.

"They're very aware of the time they're spending on the telephone, whereas if they're sitting next to us, they're not quite so aware.

"All morning I've had people saying, 'I'm sorry, I don't want to take up your time. Here's my problem. How can we solve it?'"

The National Hauora Coalition, which covers 235,000 patients at 52 general practices from Auckland to Whanganui, said the country going into a full lockdown would not fundamentally change what they were doing.

"It creates a small window of opportunity to do everything we can to prepare... most of the infrastructure is what it is, and we just need to work it really, really well."

The fact that 85 percent of their Māori households had smartphones was helping alot with done phone consultations, he said.

Samantha Murton, whose practice is in Te Aro, Wellington, said the phones had "gone completely mad" but patients were happy at a move they perceived as keeping them safer.

"If patients could be patient, that would be really great."

Her practice was staggering the day to cut down on patient-to-patient contact and reduce the duplicate use of protective gear for staff.

"We are doing as many flu vaccines as we can in the morning. We've got a time in the afternoon where we're going to be doing in-person consultations for the time that we have got the gear on.

"Then late in the afternoons, we're going to do any swabbing that we need to do," said Dr Murton, who is also President of The Royal New Zealand College of General Practitioners.

Doctors were hopeful of meeting a target of doing 70 percent of consultations remotely.

But Ben Hudson of a three GP practice in Lyttelton stressed that some people must still be seen, such as someone with acute abdominal pain or respiratory difficulties.

"There's quite a few things it would be difficult to manage without seeing someone," Dr Hudson said.

The Medical Association said it was also about keeping doctors and nurses safe, and for that the Health Ministry must continue to make personal protective equipment and swabs available to general practices on the front line.

The Health Ministry said at hospitals many outpatient consultations could be done over the phone.