The Health Minister says New Zealand is now effectively at war with Covid-19 - and one of the lines of defence is an early launch of this year's flu vaccination campaign. 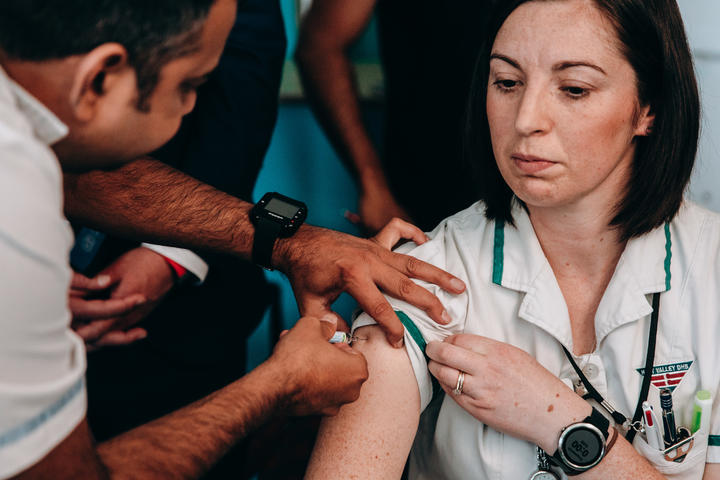 While it won't protect against Covid-19, it will help ease pressure on the health system over winter.

It comes as the government launches a public health campaign, with a war-time ring to it: 'Unite Against Covid-19'.

But it seems some on the frontline are still waiting for their ammunition, with one medical centre telling patients they don't have any flu vaccines.

David Clark said 'Unite Against Covid-19' was a call to action in the war of us versus the coronavirus.

"We need as a country, everybody doing their bit. Everyone can do something in this battle against Covid-19. That is as simple as washing your hands regularly, it's as simple as not going out when you're unwell, but it's also about, you know, giving your elderly neighbours a phone call checking on how they're doing," he said.

Another weapon in the arsenal is ensuring the most vulnerable get vaccinated against the flu.

The government's vaccine campaign is starting two weeks early and it will be bigger than ever, with 400,000 more vaccines than last year.

Vaccinations are free for at risk groups, including anyone 65 and over, pregnant women, people with certain chronic conditions and young children with a history of severe respiratory illness.

"The flu causes significant strain on our health system and vaccinating yourself against preventable illness like the flu will ensure hospitals will be used by people who need them most," Clark said.

John Atkinson, who is over 65, tried to book in to get a vaccination with Ropata Health in Lower Hutt yesterday, after hearing the Government would be making an announcement.

He was told they wouldn't have any vaccines until April and they couldn't book ahead.

His brother, also over 65, tried to book late this morning and was told the same thing.

"With the things going on you might have to wait two weeks for an appointment anyway so I just thought I'd get in early if it was available," he said.

Atkinson gets the flu vaccine every year, and is mindful of not putting extra pressure on the health system at this time.

"It would just be good to clarify it rather than broadcasting it to the nation that you can get it from today when apparently you can't in some cases," he said.

Ropata practice manager Adrian Tucker said they only found out yesterday the government was bringing forward the vaccine campaign.

He said the vaccines were already due to arrive on Friday, but they can't book appointments until they physically have them.

"If we set up a flu clinic today we could put 200 patients through those but if the vaccines don't turn up on Friday, we've then got to ring and disappoint all those people, so it's just the work load as well, especially at this busy time," he said.

Tucker said their phones have been ringing off the hook today following the government's announcement.

Tucker said the practice would be proactively chasing up with patients that fall into the at-risk group.

Clark said more than 200,000 vaccines have already been distributed across the country, and the rest are on their way.

He urged those experiencing a little delay to be patient.

While Clark could give assurances the most vulnerable are being prioritised, he wouldn't give reassurances there will be enough vaccines for everyone who wants one.

"Pharmac are the experts at projecting forward what we need. As soon as Covid-19 broke New Zealand ordered more vaccine, we got ahead and so that's why we have 30 percent more vaccine than our record year last year," Clark said.

National's health spokesperson Michael Woodhouse doesn't think there will be enough for everyone who wants a vaccine this year.

"And I don't think even the government does. In the second stage of the package that was announced yesterday there's funding still available for flu vaccines.

"I think they should act now and get as many as they can in. Much better to have more than we need than not enough," he said.

Pharmac is still looking to see whether it can source more, but not surprisingly, global demand is huge.

The vaccine will be available for the general population from April 13th.