Travellers passing through the new $29 million airport terminal in New Plymouth next week will find themselves immersed in the culture of the local hapū Puketapu. 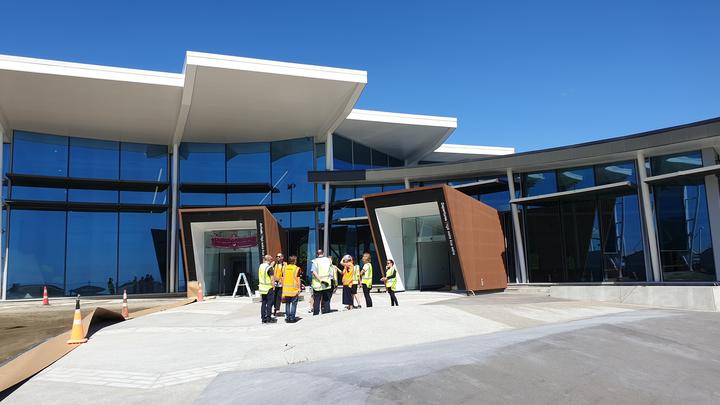 The building - which was blessed at a dawn ceremony today involving iwi from around Taranaki - has been designed by celebrated Puketapu artist Rangi Kipa to reflect the ancestral story of the Te Atiawa hapū and reconnect it with its whenua.

The New Plymouth Airport is built on land acquired through the Public Works Act in the 1960s and it incorporates several pā and urupā of significance to Puketapu. 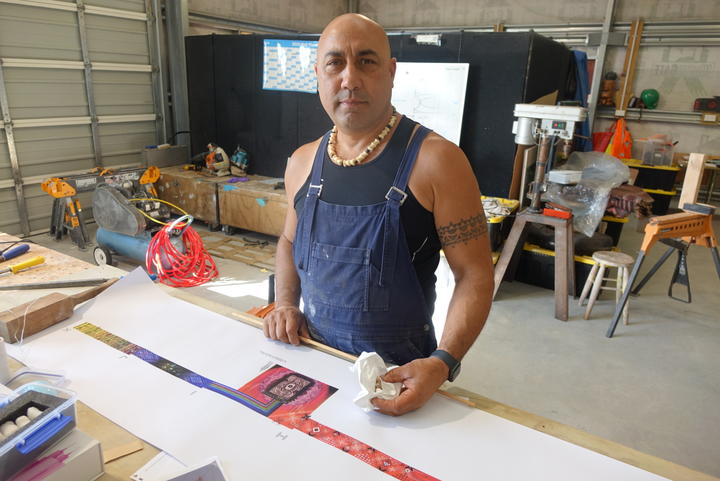 Kipa said when the hapū learned about an earlier vision for the building it was made clear to the airport's owner - the New Plymouth District Council - that the Puketapu did not want to be merely consulted, it wanted to be involved in its design.

Kipa said very little of the architecture in New Plymouth reflected the indigenous culture and it was if anything Māori had been removed.

He said by contrast the new airport terminal had the story of the Te Atiawa ancestor Tamarau stitched into its very fabric. 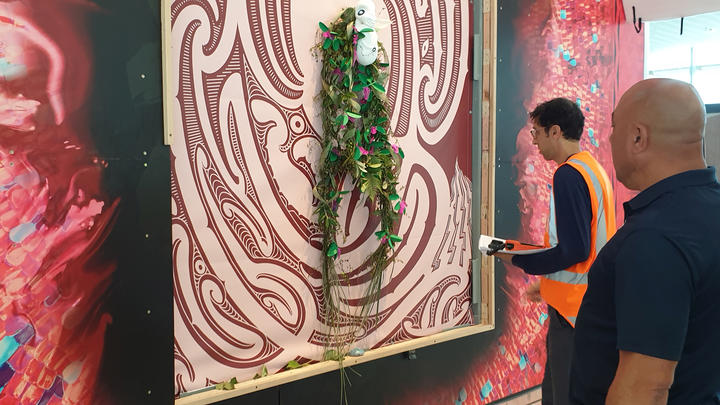 Tamarau is said to have come down from the heavens after seeing the maiden Rongo-ue-roa bathing in a river.

From their union came Awanui-a-rangi - from whom Te Atiawa takes its name - meaning descended from heaven.

"So you can see on this side this is Tamarau's rays of light. He comes into the night sky, which is Puanga, and the two of them join here in union where this is her womb," Kipa said.

"And so there's going to be a large 18-panel two metre by two metre cast glass work there that's going to be back lit. And then there is a figurine that represents Awanui-a-rangi."

That figurine takes its form from a whalebone carving discovered on the airport grounds which is believed to be hundreds of years old.

Kipa said Tamarau's story - which would involve 70m of stylised tukutuku panelling and whakairo - was perfect for a building which connects the celestial to the terrestrial.

"And if tourism is going to be a significant part of our economic drivers, how are we going to do that? What's our story? I mean what are we going to tell people? The best thing you can do is tell people who you are in relation to this land." 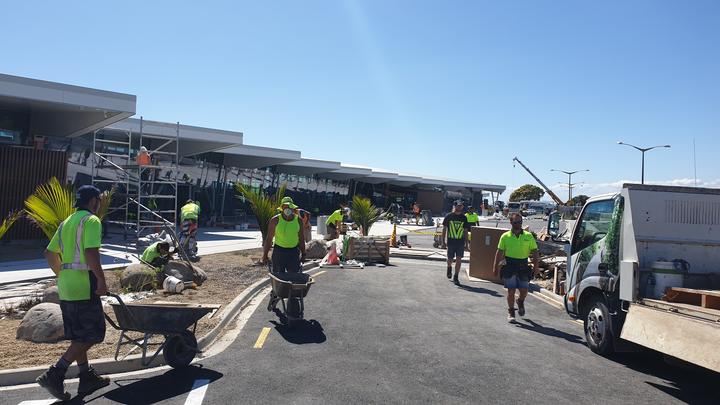 Kipa said he envisaged that the terminal would become a place where Puketapu hapū members would feel at home.

"The airport is obviously a significant and massive piece of infrastructure, but woven right through from the ground up is our narrative and I think that makes a difference and not withstanding it's just a building we've got a number of other things woven into the building which mean we definitely won't be strangers in the building." 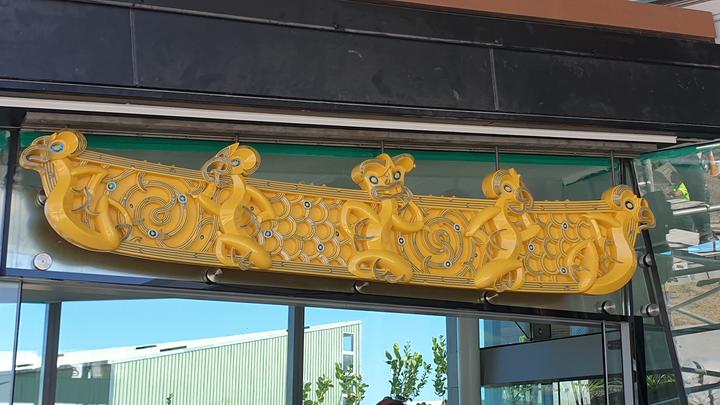 One of those is a mauri stone at the entranceway where those in mourning will be encouraged to lay kawakawa leaves when welcoming relatives to tangi.

Chairperson of Puketapu hapū Theresa Patu said there was no underestimating the significance of the development to its members.

"It's huge. I don't think people actually have a full understanding of what it means to be returning back so there's two focuses here. There's one of us returning back onto the whenua and being part of the landscape and everything, but there's also us being seen by thousands and thousands of people as a business." 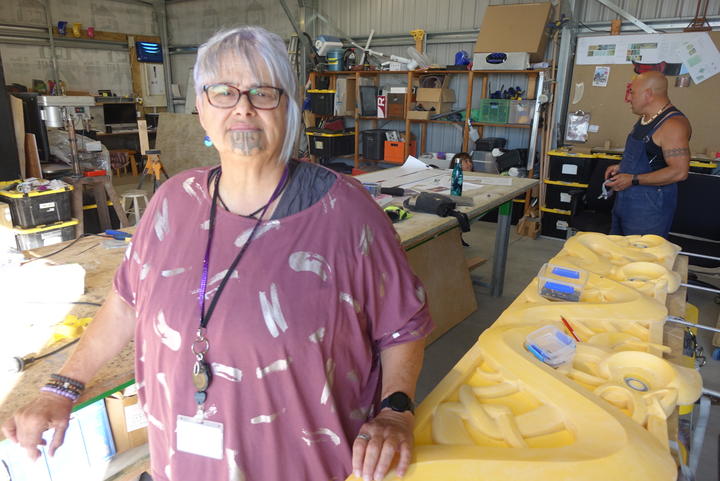 Theresa Patu says it's not only significant for the hapū to be back on the land but to be seen as a business owner in the terminal. Photo: RNZ / Robin Martin

Patu said the hapū, which had always been traders, would have a permanent retail space in the terminal.

"So every year we'll print a new t-shirt with part of the design that's already in the airport and we're doing a lot of natural stuff. Gifts people could pick up that have a Māori flavour ... A lot of rongoā [traditional Māori medicine] that's made here by some of our local people ... A bit of local art."

The shape of the terminal was also significant, she said.

"The actual building is constructed in an arch. You have the air side and land side, and that is a form of embracing and welcome. It's not only an airport, it's the gateway, and Puketapu will extend its manaakitanga to all."

New Plymouth Neil Holdom said the project was the perfect opportunity to walk the talk in terms of working in genuine partnership with iwi and hapū.

"The history of Puketapu on that land and the wider history of Taranaki actually those stories haven't been told and I suppose telling them through the visual arts to an audience of more than 400,000 passengers a year is a perfect way to share who we are as a region."

Holdom was confident critics, who had bemoaned a Don Driver relief commemorating the landing of Kingsford Smith at New Plymouth Airport in 1933 not featuring in the new terminal, would be won over.

"I'm just excited about a project that really celebrates who we are as a people and creates an amazing canvas for an amazing Taranaki artist and is very functional and lets get the covers off and gets people going through and see what the critics have to say after it's all open." 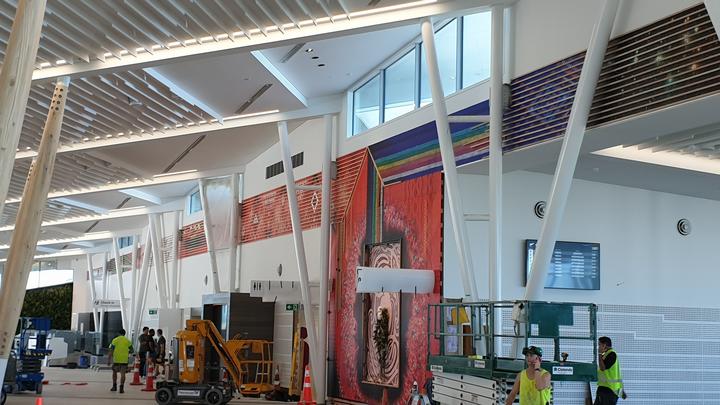 But Rangi Kipa, who described the work as his magnum opus, was steeled for a mixed reception.

The first flights were expected to taxi into the new terminal on Tuesday.