A new Len Lye sculpture is making its world premiere at celebrations to mark the 50th anniversary of the Govett-Brewster Art Gallery today. 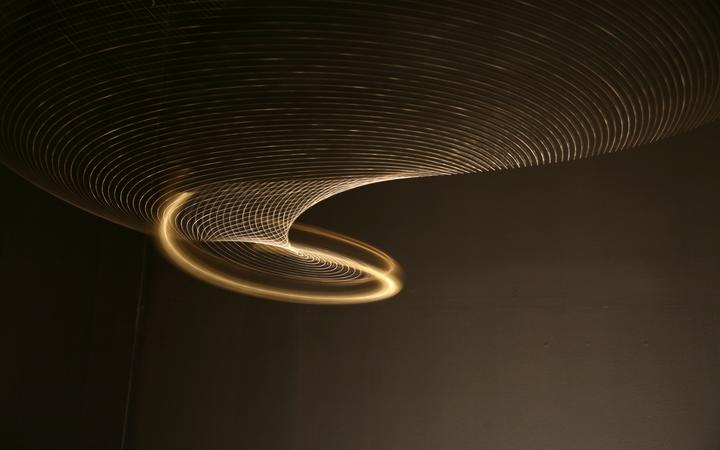 The Sky Snakes will be hung 9 metres from the floor and driven by electric motors, creating wave patterns over an eight-minute loop. Photo: Supplied

The seven swirling Sky Snakes are each made from 4.5m of ball chain - similar to the chain traditionally used for lamp or light switches - with a brass ball representing the head.

Co-directors of the Len Lye Centre / Govett-Brewser Art Gallery, Aileen Burns and Johan Lundh, said the Snakes hang from the ceiling and spin to create dancing patterns of light and movement.

"This is the international debut of the seven Sky Snakes, and it's a great exhibition to help mark the Govett-Brewster's 50th anniversary celebration," the co-directors said.

Hung 9m from the floor, an electric motor drives each Sky Snake and creates wave patterns at a speeds of up to 190 revolutions per minute.

It is programmed to start slowly, form figures, maintain each form for a time, then coast to a stop over an eight-minute programme.

The money was used to buy and convert the Regent Cinema on Queen Street into a space for contemporary art. The gallery remains there today.

It opened in 1970, three years before Brewster's death aged 87, and in the same year she made a second bequest of £72,000 to start a permanent collection.

Her trust deed underpins the Govett-Brewster to this day, and the 1968 collection policy development she oversaw, focuses on new forms of art and sculpture fostering the development of artists from New Zealand and the Pacific Rim.

In 1977, the Govett-Brewster presented Kinetic Works, the first survey of Len Lye's work held anywhere in the world.

And just months before his death in 1980, Lye established the Len Lye Foundation to continue his artistic vision and chose the Govett-Brewster to be the home of Len Lye culminating with the opening of the Len Lye Centre in 2015.

The seven Sky Snakes debuting today has been made in accordance with Lye's instructions by the Len Lye Foundation which funded its construction along with donors.

Lye referred to a group of Sky Snakes as a "rhumba" and he envisioned one installation with 46 Sky Snakes around a "storm chamber", with a Storm King made from a hanging sheet of metal in the centre.

A single-snake version was exhibited at two New York galleries in 1965 and last year at the Museum Tinguely, in Basel, Switzerland, as part of an exhibition of Lye's work.

The two-metre tall behemoth uses 5kg of glitter and will be the centrepiece of a street party marking 50 years since the New Plymouth District Council-owned and operated gallery first opened its doors.

"I don't want to spoil the surprise but all I can say is once the cake is activated people will be blown away," Paterson said.

"Fifty years is a significant milestone for a gallery, and to help celebrate this you have to have a monstrous two-metre tall cake covered in glitter."

The party runs from 3pm to 9pm on Queen Street, New Plymouth.

Food trucks as well as a bar will be available.

Party-goers can participate in and interactive art work The Cell by Brook Andrew and take part in workshops.