New Zealanders on board the coronavirus-hit Diamond Princess are deciding this morning whether to take up Australia's offer of evacuation. 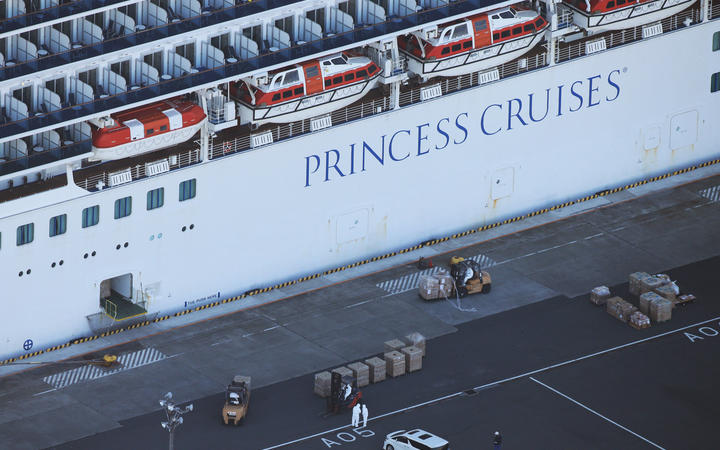 A chartered Qantas flight will fly more than 200 Australians from Tokyo to Darwin, but another two-week quarantine awaits them when they arrive back home.

Eleven Kiwis have been in quarantine for 13 days on board the cruise ship since being docked off the Japanese port of Yokohama. Two other New Zealanders remain in hospital in Japan with the virus.

An email to those remaining passengers from the The Ministry of Foreign Affairs and Trade has advised them the deadline to confirm seats on the flight is this morning and that those taking advantage of the assisted department must agree to a further 14-day quarantine period in New Zealand. Transport is being arranged from the ship to the airport.

Australian Prime Minister Scott Morrison has also said the second stint in quarantine for Australians was crucial to ensure the health of all Australians.

"The New Zealand Government is working to facilitate onward travel from Darwin immediately on to New Zealand, and the details of this will be confirmed as soon as possible," the email stated.

However, some New Zealanders have declined the assisted departure offer in hope they will avoid a second quarantine period.

Auckland business owner Wren Manuel and his wife Kay were offered seats on the plane leaving Haneda Airport for Australia tomorrow, but hoped remaining on board the ship until being cleared of the virus by Japanese authorities would allow them to travel freely without further restrictions. They planned to return to New Zealand at a later date to avoid quarantine.

"I would rather do my quarantine period here and get it complete and cleared by the Japanese Ministry of Health," he said.

"We have been tested today, the results will be out within the next couple of days and if we are negative then it means we'll be cleared by the Ministry of Health. We will be free to go into Japan, spend a couple of more days here and then basically go home as and when we please."

He said the couple had managed to get a travel credit with their airline, meaning they could reschedule flights as soon as they knew when they'd be leaving the cruise ship.

In the email to passengers the Ministry of Foreign Affairs and Trade warned that for passengers who chose to remain on board, there might be border restrictions, which could hinder attempts to get back into New Zealand.

"The New Zealand Ministry of Health advice is that you require a further period of isolation of 14 days from when you leave the vessel," it stated.

"Unfortunately, there may be border restrictions which could constrain your other options for return to New Zealand before Wednesday 4 March 2020. This is a fluid situation.

"If you arrive in New Zealand on other commercial flights within the 14 days after leaving the vessel you will be subject to health screening on entry which may impose on you a number of restrictive conditions, including restricting your movements or requiring your isolation."

The email added that advice from epidemiologists sent to Japan was that, "despite diligent efforts", there may be ongoing transmission of the virus on board the vessel and that meant passengers were "at risk of infection whilst you remain on board".

This made a further 14 days in quarantine in New Zealand necessary. Details of quarantine were currently being worked out.

The Ministry of Health will give more detail about how New Zealanders who return after being on the Diamond Princess in Japan will complete their quarantine at its regular daily media conference this afternoon. The Ministry confirmed has that there are 4386 people registered as being in self-isolated in New Zealand, a period that also lasts 14 days.

Yesterday the number of infected people from the Diamond Princess rose by 99 to 454.

Already more than 300 Americans have been evacuated from the cruise ship and flown back to the US. Fourteen more have been found to have the coronavirus.