A sea lion and its pup have died after being hit by a vehicle in South Otago. 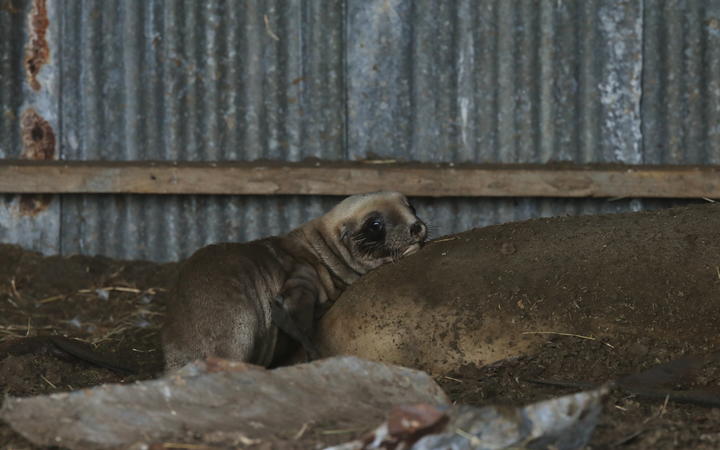 Matariki and her cub. Photo: Supplied / Department of Conservation

Eight-year-old New Zealand sea lion/rāpoka Matariki and her one-month-old pup were struck as they crossed Kaka Point Rd near Balclutha on Wednesday night.

The pup died as a result of its injuries and Matariki was euthanised by a vet yesterday after she was unresponsive and suffered internal trauma.

The Department of Conservation said Matariki might have been nursing her pup on the road at the time they were hit.

"Matariki was gifted her name by local whanau. She was a taonga of the sea lion population at Kaka Point," he said.

"Over the years she had developed a habit of giving birth to pups in unique places such as under a crib or in a farmer's shed."

Matariki was likely taking her pup to a new spot to rest when they were hit.

"Our whanau are saddened by our loss of Matariki and her pup. She had a special place in our hearts."

The department wanted the driver of the vehicle that hit Matariki to come forward or for witnesses to contact the Murihiku DOC office on 03-211 2400.

"We understand accidents happen, but its important people inform DOC if they do hit native wildlife. All New Zealand sea lions are named, tagged and well known within their community. This is a huge loss for Kaka Point residents," Mr McCarroll said.

"By talking to the driver we're hoping to understand more about what has happened and identify ways of protecting sea lions from accidents like this in the future.

"This is a timely reminder; we are sharing our coastal roads with wildlife and vehicles need to slow down.

"It's important we remember to keep an eye out for other native wildlife on the roads such as korora/little blue penguins and kekeno/New Zealand fur seals, which can cross the road at any time.

The New Zealand sea lion is classified as nationally vulnerable with an estimated population of about 12,000.

It's estimated the New Zealand sea lion population numbers around 12,000.

Matariki was born at Surat Bay in The Catlins in 2012 before relocating to Kaka Point in 2016.