Repairs to a signal box that causes commuter chaos in Auckland this morning are likely to last the rest of the day - causing more disruption this evening. 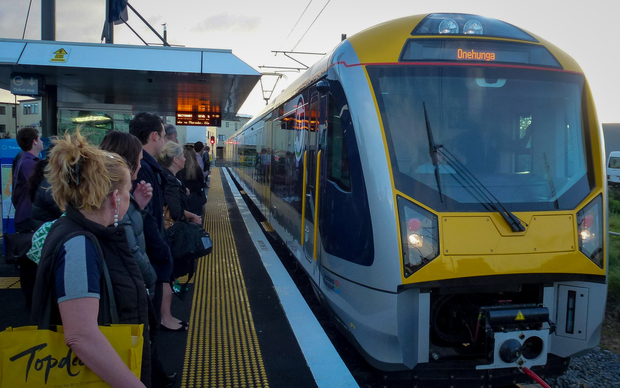 To add to commuter woes in the city were delays on Auckland's Harbour Bridge northbound after a crash, which has now been cleared.

It blocked a lane northbound for about an hour.

Train services on the Onehunga line have been running between Onehunga and Penrose only, after a fire at Newmarket caused the signalling box to fail, Auckland Transport said.

There were no trains to Penrose, Ellerslie, Greenlane, Remuera and Newmarket this morning. On other lines, services had ran every 20 minutes.

KiwiRail said the fire had been put out and staff were on site trying to restore the system as quickly as possible.

It said it was working with the operator, Transdev, to reroute Southern Line trains onto the Eastern Line from Ōtāhūhū.

KiwiRail Group chief operating officer, Todd Moyle, said repairs to the train signalling cabinet were likely to take at least the rest of the day.

"Smoke and water damage means the electrical equipment is being replaced and taken through a rigorous testing process to ensure trains are safe to travel on that section on the line," he said.

Trains would not be able to run between Newmarket and Penrose during this period.

"KiwiRail is working closely with Auckland Transport and Transdev to ensure disruption to passengers is minimised, by rerouting trains from Otahuhu to Britomart via the Eastern Line, around Auckland's waterfront," Moyle said.

"Passengers should check with AT for updates on bus replacements. AT has organised six Rail Replacement Buses between Penrose and Britomart, stopping at all stations, to cover the issues on the Onehunga and Southern lines.

"Onehunga line customers wishing to travel to Britomart can catch the rail shuttle to Penrose and transfer to a Rail Replacement Bus from Penrose to Britomart."

Trains would continue to run on the Western Line via Newmarket.

Auckland mayor Phil Goff had said KiwiRail was looking at options to redirect trains, but the Southern line would experience significant disruptions.

One commuter, Geet, said it was a long morning that took her an hour-and-a-half on public transport.

TRAIN DELAYS - 6:54AM
Due to a signal issue at Newmarket all services on the Southern, Eastern, Western lines will be running approx. every 20 minutes.
Southern line services travelling via the Eastern Line between Otahuhu and Britomart.
Onehunga line currently suspended. pic.twitter.com/9ZK37IjrWQ

I've just been briefed by @KiwiRail about a fire at the Newmarket signal box which is what is causing the train disruptions on the Southern line. Kiwirail is looking at options to redirect trains but the Southern line will experience significant disruptions this morning.