New Zealand researchers are taking part in an international study to find the cause of stuttering. 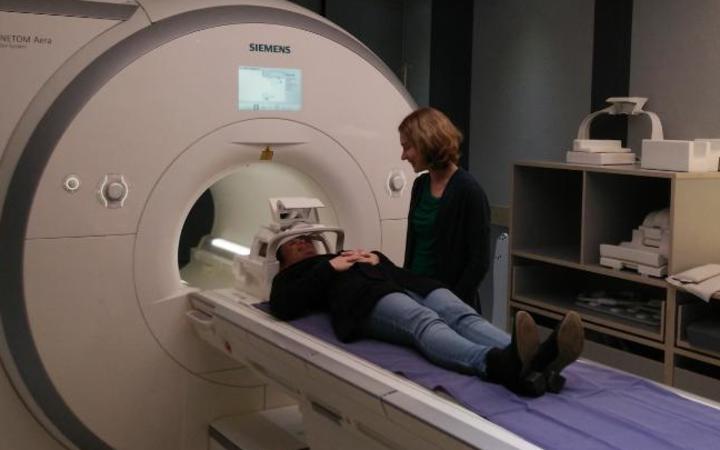 Dr Catherine Theys stands next to a study participant in an fMRI scanner. Photo: Supplied

University of Canterbury senior lecturer in Psychology, Speech and Hearing Catherine Theys said there was no known cure for speech disorders.

The researchers are scanning the brain to find out what causes speech problems.

Speech disorders could affect people who had suffered a stroke, traumatic brain injury, or neuro-degenerative diseases, such as Parkinson's, Theys said.

She has collaborated with researchers in Belgium, Canada and Otago on a paper, Brain activation during non-habitual speech production, published today in the scientific journal, PLOS ONE.

Her research uses brain scanners to identify differences in the brain that cause stuttering.

"This is important because being able to communicate effectively has a hugely positive effect on health and wellbeing," Theys said.

Researchers scanned the brains of fluent speakers and looked at what happened when people were asked to change the way they normally speak.

Participants were asked to repeat the first letter of a word, as people who stutter often do.

"Interestingly, speaking in this new disfluent manner led to increases in activation in the brain networks we use to produce speech," Theys said.

"This included brain areas responsible for the planning and starting mechanisms of speech, and also areas that monitor your movements to detect errors.

"This information is valuable to help us identify the causes of speech production problems, and help us to develop better treatment approaches for people with speech disorders."