Health experts in China say the number of people infected with the coronavirus in Wuhan could be higher than 75,000. 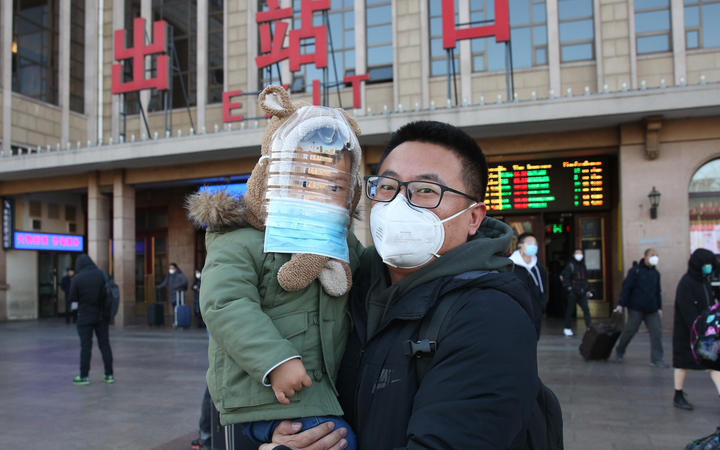 Many families in China are wearing face-masks on the streets amid concerns about the rapid spread of the coronavirus. Photo: Yomiuri/ AFP

While the number of confirmed infections is about 10,000, the researchers, based at the University of Hong Kong, looked at the growth rate of the virus and the way it can spread in people with mild flu-like symptoms.

The study, published today in The Lancet, looked at the official number of cases exported internationally from the city of Wuhan, and data from human movements and flight bookings, starting from New Year's Eve.

They estimated there were 75,815 cases in Greater Wuhan, as of 25 January. They found the number of cases was doubling every 6.4 days.

People can spread the virus unknowingly, as some people only catch a mild form - which is good news for them, but not such good news for containment efforts.

"These cases are being exported and they're pre-symptomatic, so [the researchers are saying] unless there's huge public health interventions, maybe of a similar scale to China, that further transmission is inevitable," Baker said.

"That has real significance for New Zealand while we're at this 'keep it out' phase of our pandemic plan."

The New Zealand government has been criticised for its response to the coronavirus, with officials saying there are no plans to screen passengers arriving from affected countries.

The results of a suspected case of the virus in Auckland today came back negative and there are no other suspected cases of coronavirus in New Zealand.

The researchers said there was a need for rapid vaccine development to contain the spread.

"Above all, for health protection within China and internationally, especially those locations with the closest travel links with major Chinese ports, preparedness plans should be readied for deployment at short notice, including securing supply chains of pharmaceuticals, personal protective equipment, hospital supplies, and the necessary human resources to deal with the consequences of a global outbreak of this magnitude," the researchers wrote.

Auckland University microbiologist Siouxsie Wiles said it was "not at all unlikely" that the number of reported cases was an under-representation of the number of people infected.

But most of those could have had a mild form of the infection - not bad enough to need to seek medical attention, she said. So, "the million dollar question" was how much people without symptoms were able to spread the virus around.

"And we don't have a clear answer to that yet. The cases in Germany suggest asymptomatic spread - but the three people who got it there all had either mild or no symptoms."

There have been several groups that have done similar models to this study since the outbreak first started, she said.

"All of them have indicated that the numbers of cases in Wuhan was likely to be much higher based on the rate at which infected people where showing up in other countries and information on flights out of China.

"Those models do make several assumptions though, including how infectious the virus is - which is something that's still not fully known."