From a Gutbuster stair challenge and competitive wine tasting to the more traditional athletics and football, the Masters Games promises an eclectic competition for anyone over 18. 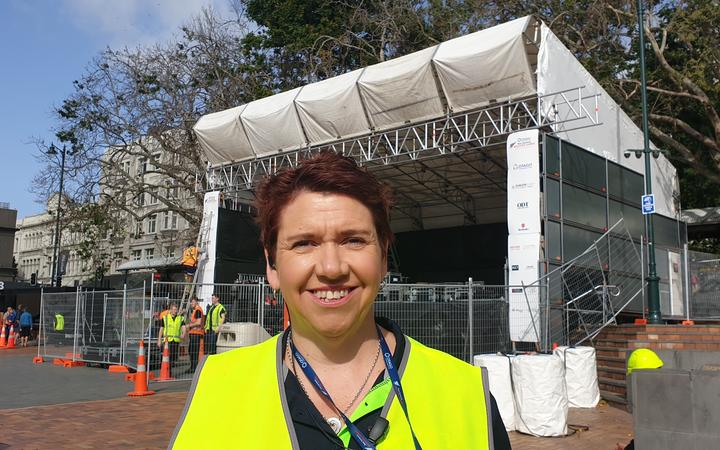 Masters Games manager Vicki Kestila says the Octagon has been transformed into the main hub for the event. Photo: RNZ / Tess Brunton

Close to 5000 people are expected to compete in Dunedin with a steady stream of people registering throughout the day.

While it may be a social event covering more than 60 sports, the games attracts professional athletes as well as amateurs.

Power lifting wasn't Bruce Park's first choice of sports, but after an injury, he decided to give it a go at the 2008 Masters Games.

Several years later, he set his first world powerlifting record at 76 during a competition in Orlando, lifting 196kg.

"A very clever Finland gentleman turned up and he put another half, so I had this world record for about three minutes. But that's what records are for. You don't work on them to hang on to them, you just give them a kick around every now and again," Mr Park said.

Now at age 82, the Balclutha resident is preparing to defend his latest world title after deadlifting 161kg in the 80-to-85 age category.

Although his sights are set on a world championships later this year, Bruce Park said he was looking forward to competing tomorrow at the Masters Games.

Bringing some trans-Tasman rivalry, Brisbane resident Betty Clark is preparing to compete in lawn bowls with her husband and two friends. They're called the Boxing Kangaroos.

"It's a way to combine our love of lawn bowls with a little bit of a holiday," Ms Clark said.

"Otherwise you're just coming as a tourist. But if you come to play a sport in a country, you're part of the locals as well so you get to understand and live their culture."

A decade ago, Sara Gane was winning national titles in breastroke.

While she hung up her competitive goggles for several years, she's back in the pool and preparing to compete in the Masters Games.

"To me, I didn't really think of that age bracket when I entered. I just saw that I was eligible and I thought why not," Ms Gane said.

"I'd encourage anyone else to give it a go if they can."

The Southern city has hosted the Masters Games every second year since 1992.

It times in well with the Dunedin City Council's latest trial to keep cars out of the city centre with the main hub moving to The Octagon.

By mid-morning, work was already well underway on the games hub under the eye of the manager of the games, Vicki Kestila.

"We have a stage looking down towards our beautiful railway and that's also looking towards our bars ... so people can enjoy the atmosphere and the entertainment," Ms Kestila said.

Trees in planter boxes sit in the middle of the road and additional seating has been spread around the Octagon.

"We're just making sure that it's a really nice for pedestrians to wander around."

Ms Kestila said the Masters Games encouraged camaraderie as well as competition, and had a message for competitors: "Go out there, meet different people and enjoy it. It is social and just have a great time."

Competitors can swap their runners for dancing shoes tomorrow night as the Masters Games is officially opened.