Groups of albatrosses have taken a turn into espionage, patrolling the seas looking for illegal fishers as part of a study led by researchers from the French National Centre for Scientific Research. 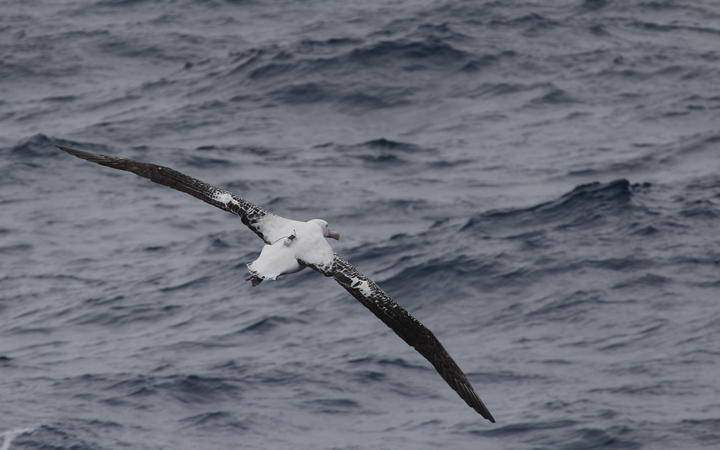 An albatross with a transmitter fitted. Photo: Supplied/Henri Weimerskirch

Around 200 of the birds were fitted by GPS trackers and then sent to the skies in the hope they would run into vessels operating where they shouldn't be.

Study lead author Henri Weimerskirch told Morning Report the albatross turned out to be the perfect candidate for the spying mission.

"They are covering extensive distances in the Southern Ocean, 107 kilometres in single day and they are very attracted by boats, especially fishing boats. [They] are in fact our ideal model to obtain information on the location of fisheries"

Weimerskirch said the birds were fitted with state-of-the-art loggers with a GPS attachment that detected the radar emissions of boats. When a boat was detected the location was recorded on the logger and sent back on a satellite, allowing the team to obtain its location within minutes.

There were initially concerns the albatrosses could be outed as spies and become targets for fishers wanting to protect themselves from detection but Weimerskirch said that's not too much of a worry.

"The logger is very discreet on the bird, same colour so they are very difficult to spot on the back of the bird.

"Also... the albatrosses they are hundreds of birds or thousands of birds around a single fishing boat and the seas very rough. So it's very unlikely that a fisherman can spot easily a bird equipped with a logger in the crowd of the other birds."

The study was published in the US journal Proceedings of the National Academy of Sciences. The study authors said they believe the technology has useful applications for conservation.